Fairchildren and the Creative Spirit of Helen Pringle

Not long ago, I (Dixie) was lucky to purchase a Helen Pringle doll to add to my study collection for a while.  Most doll groups that focus on making vintage and antique dolls will eventually discuss Helen Pringle’s work. Her creations have the appeal of antique dolls, something many of us try to capture. Helen’s work is highly collectible for those who love cloth dolls.

In studying this doll, I had the chance to ask Helen some questions about the doll Sethany Fairchild (pictured) and her other artistic creations. She graciously answered them.

What inspired you to make antique inspired dolls?  How did you decide to sell them?

My mother, aunts and grandmother were seamstresses and my sister and I learned to sew as girls. I remember an apron I made in 4-H, and learning to embroider as a child. Around 1980 I met Elizabeth Patton, a fellow antique collector who moved from Houston to Fort Worth.  She was a doll collector of mostly big papier maches and had done repair for a doll shop in Houston.  Sitting in a child's chair in Elizabeth’s house was a huge cloth doll in children's clothing - she was mind-boggling.  When Elizabeth told me she had made the doll, I could hardly believe it, and asked her if she ever shared her pattern.  Not yet, she said.  She had devised the pattern from a large doll she had repaired, she told me.

Several years later, she sold me her pattern, reserving the right to make her own dolls still, though I don't think she ever did. (In fact, she later had me to make her three, 36" black girl and black boy and 26" white girl.)  Soon in the mail came a flat envelope containing odd pieces of grocery sack, which I finally figured out was the pattern, without instructions. 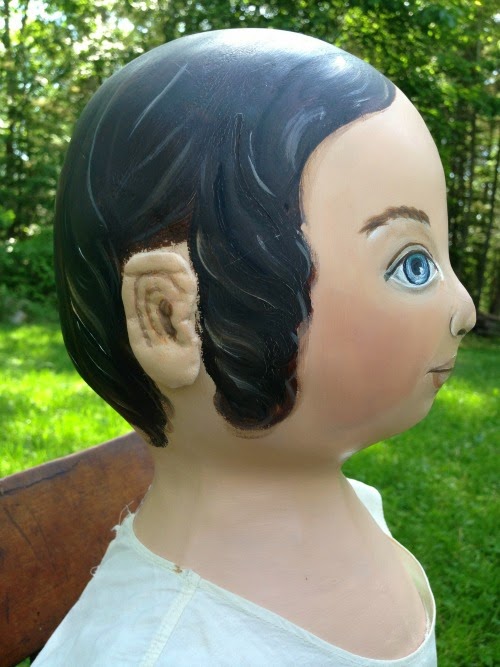 Naturally, I began to tinker with it, and my first efforts at painting were pretty crude, as I am a left-brain person and not at all artistic.  I had made stuffed toys for my children, so I didn't have to learn that.  I don't remember if Elizabeth had an undercoating, or if she used acrylics or oils, but the Miracle Messy Mixture was my own undercoating for the head, shoulders and arms. (See the recipe for Miracle Messy Mixture here). One of the first dolls I made was a 36" girl for Dolly Johnson (Dolly FairChild) in 1983, and then people began to order them.

This is a chicken or egg question:  Did your interest in dolls grow out of your love for antiques or did your love of antique dolls lead you to love antiques?

I was an antique collector long before and not a doll collector.  Rug hooking also preceded dolls, as that began in 1978.  I was never, and am not to this day, interested in "fine dolls" of bisque, French bebes, etc., though did come to like early small chinas, cloth, wood, and small papier maches.   I am in awe of  Edyth's stunning collection.

In the course of our email conversation, Helen shared about the doll types she created:

Dolls Series Made by Helen Pringle 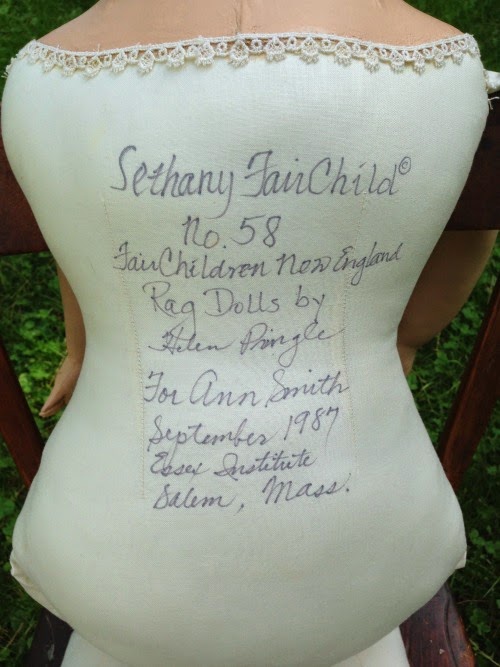 FairChildren were made in 36” and 26” sizes. They wore actual children's vintage clothes and shoes, or dresses in documentary prints or old fabric made especially for them. There were boy and girl and black and white versions of these dolls.  Helen numbered the larger dolls.

For years Helen included some antique piece with each, jewelry/handbag for the girls, pin/toy for the boys, until it became too expensive.  The 36" dolls had one bag of stuffing in the head and 2-1/2 to 3 in the rest of the doll.  The head pieces are double-stitched because of the large amount of stuffing needed to obtain the rounded shape.  Helen mentions that on special request, she made one baby in these dolls. Helen thinks she may have made up to 90 Fairchildren dolls.  Sethany, pictured above, is No. 58.

Maids and Lads of Salem

The Maids and Lads were 21” in height.  They were made for a Harvest Festival show at the Essex Museum (now the Peabody-Essex) in Salem, Mass.  They were small versions of the big Fairchildren dolls.  Their clothing and shoes were new, but in old styles.

Tansy-Tabby was made for a class Helen taught at a Doll Seminar in Utah, measuring 10-12” in height.  She was a small project to teach oil painting a doll in an easily portable unit.  Helen loves old topsys and has several in her collection of antique textiles. At one time Helen offered a pattern of Tansy/Tabby.

Mary Mason-Dixon dolls measure about 14-15".  She was inspired by an antique doll and was also sold as a pattern for other doll makers.   Helen says, “I loved the Marys; a friend in Maine asked me to repair her old, old cloth doll, which I did, and then gave me permission to reproduce her.  They came in both black and white girls; all the white Marys had red hair, and all the black Marys had black hair.The first one I made had a wig of red mohair, but the rest had painted hair. The Marys had a little verse that went with them, which I typed and printed on fabric on my printer.”

One of a Kind Dolls:

Helen tried her hand at Sculpey and made several dolls of it.  She says it was wonderful fun.

For her niece's collection,Helen made a tiny replica of Hitty, just a little bigger than the real Hitty (made of wood) dressing her in a petticoat with her name cross-stitched on the front just like the original Hitty.

Helen made other doll heads/arms/legs from Sculpey and made cloth bodies for them.  Helen says, “The better one is Persona (The Pleasant Peasant), seated in a rustic chair with a wooden bowl and spoon in her lap, barefoot and with red hair in an early style.  Standing, she would be about 14-15" tall.”

All these one of a kind dolls were finish-painted with oils.

For someone who describes herself as “not at all artistic”,  Helen created a large body of three dimensional works, reminiscent of folk dolls of the past.  Helen’s dolls are beloved by doll makers and collectors alike.  Doll makers inspired by antiques want to emulate the spirit that Helen captured in her work. 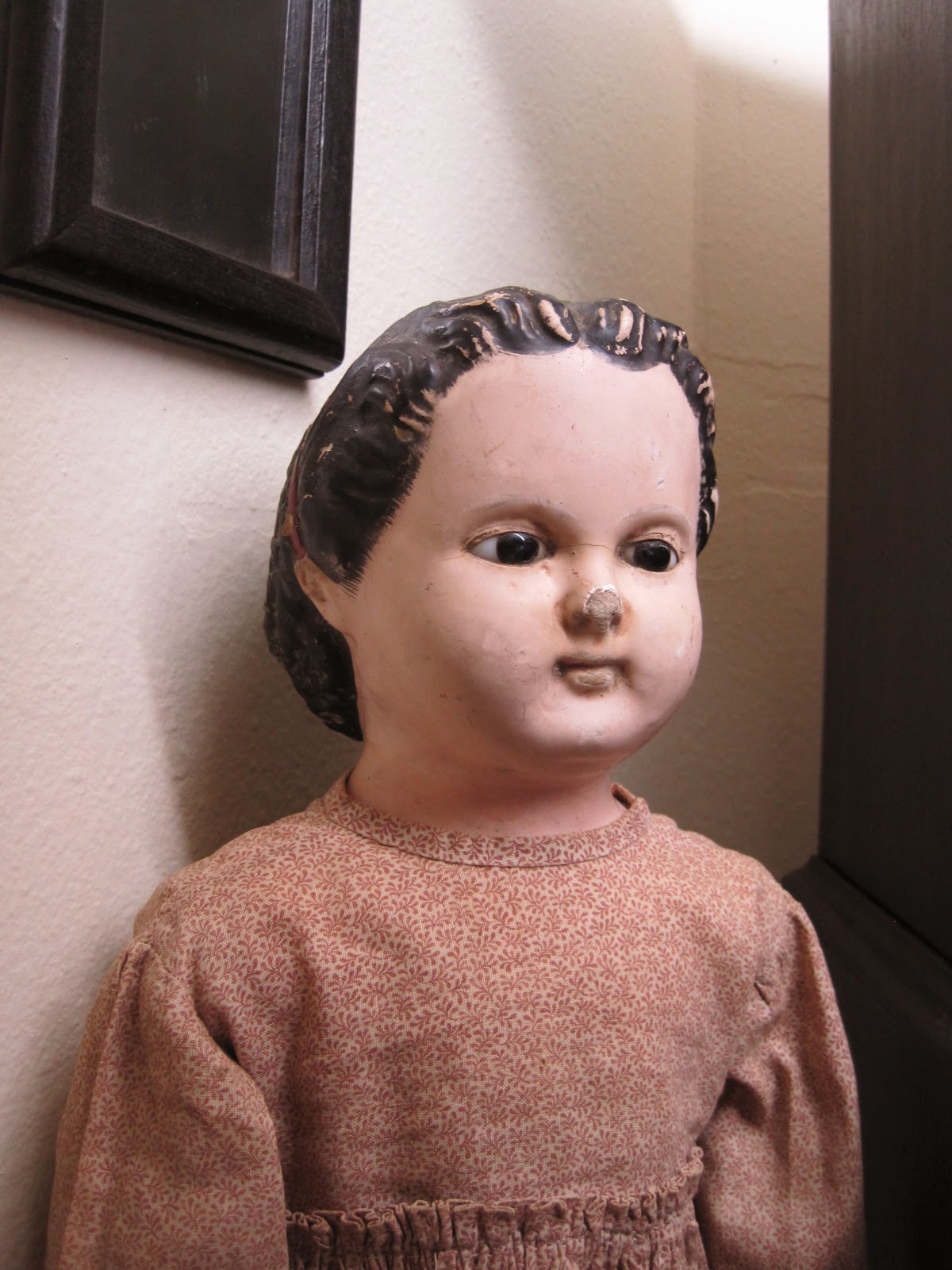 This nice early German glass eyed Papier Mache’ head with a snood hairdo once had a Motschmann type body.  Pictured also is a blond waxed doll of this period on her original body.  I will watch for a correct old body, and may or may not ever get it.  There was a broken Motschmann for sale just this week on line, but too small to go with this head.  Meanwhile, I have placed the doll on an old cloth body and added arms from a wax doll of 1870 to 80.   This way she can be dressed and enjoyed with the doll family. The mid 19th century under clothes of little girls and their dolls are so sweet.  How nice it is to find an old doll dress just right for her. 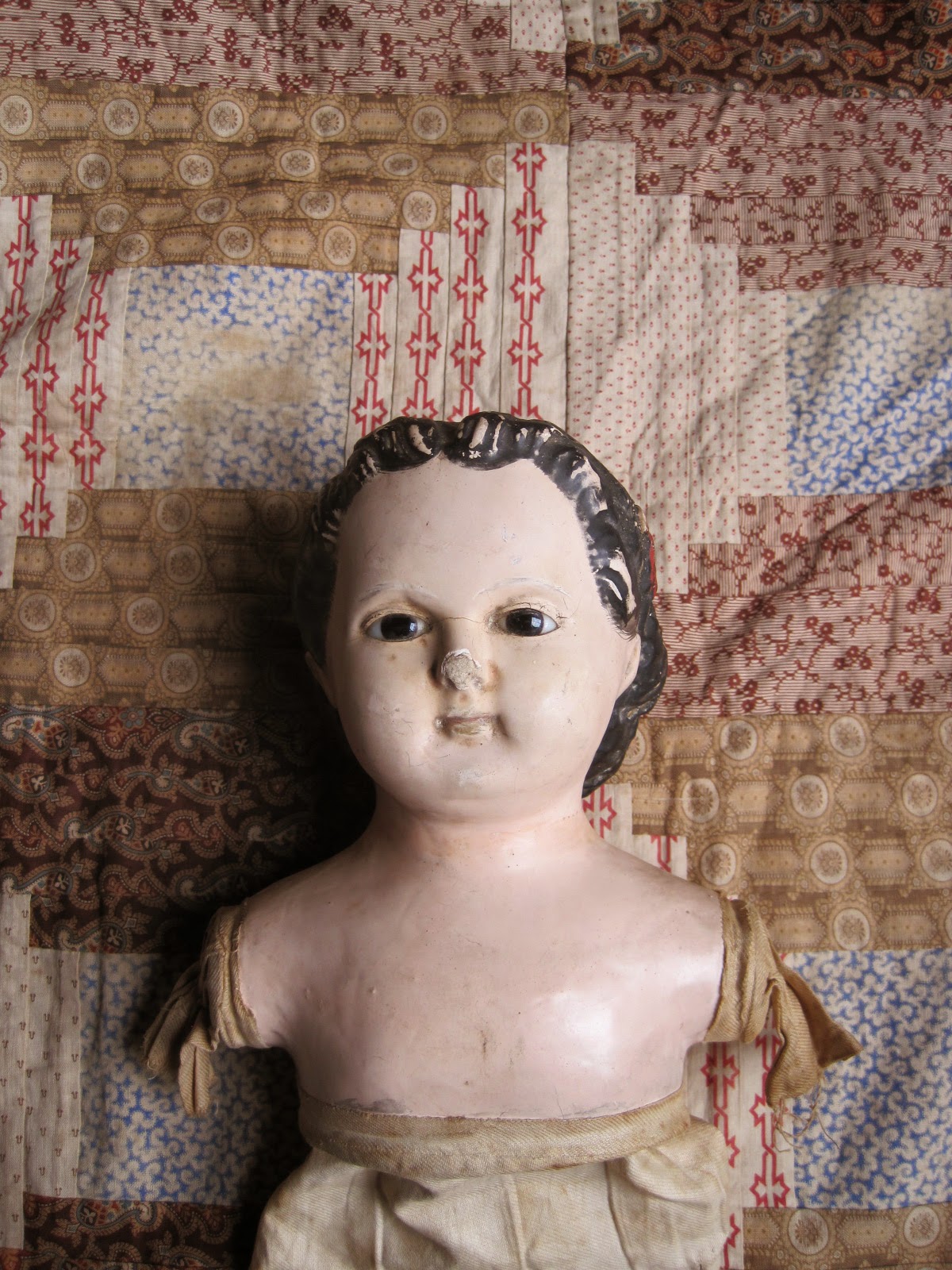 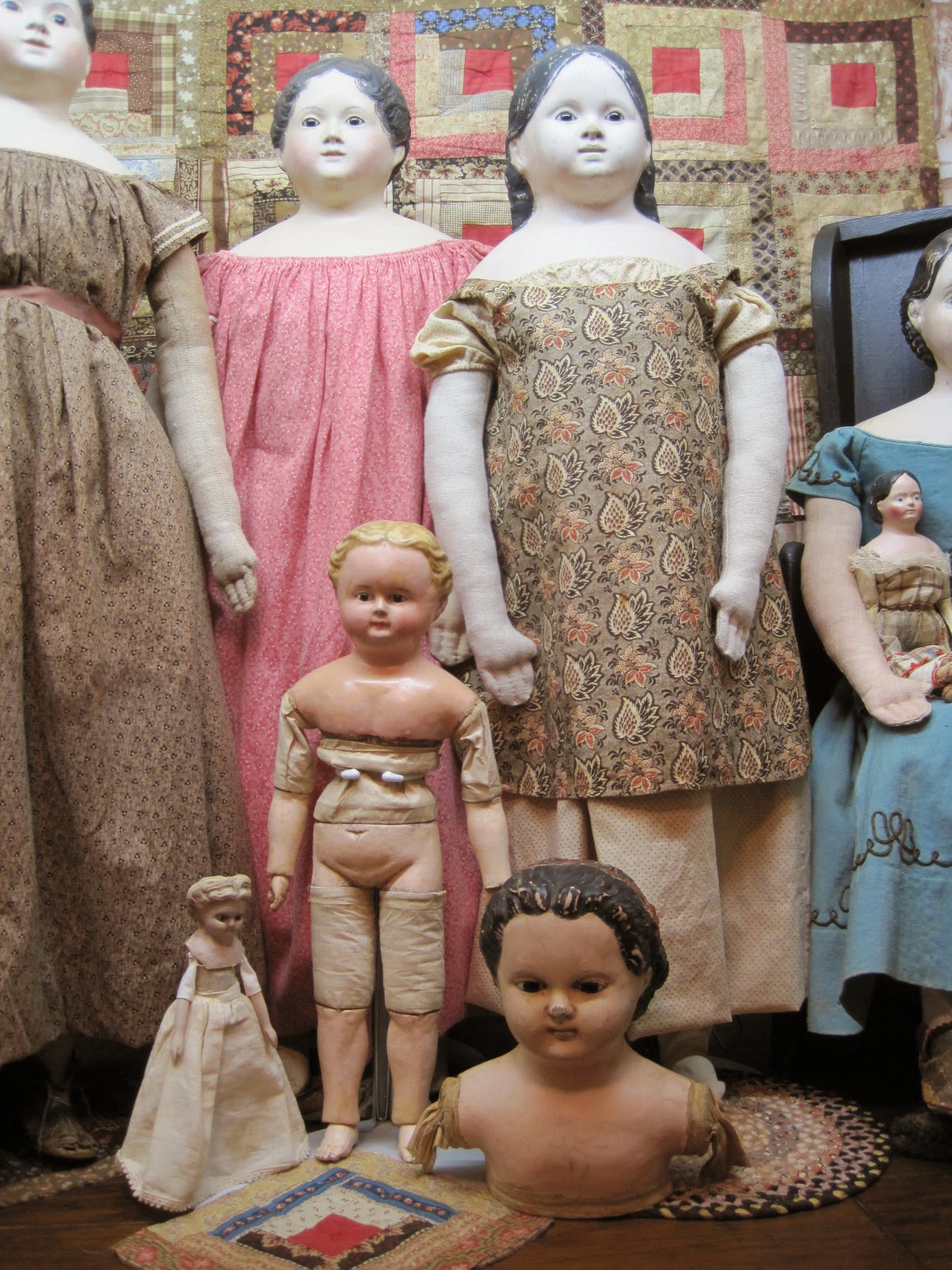 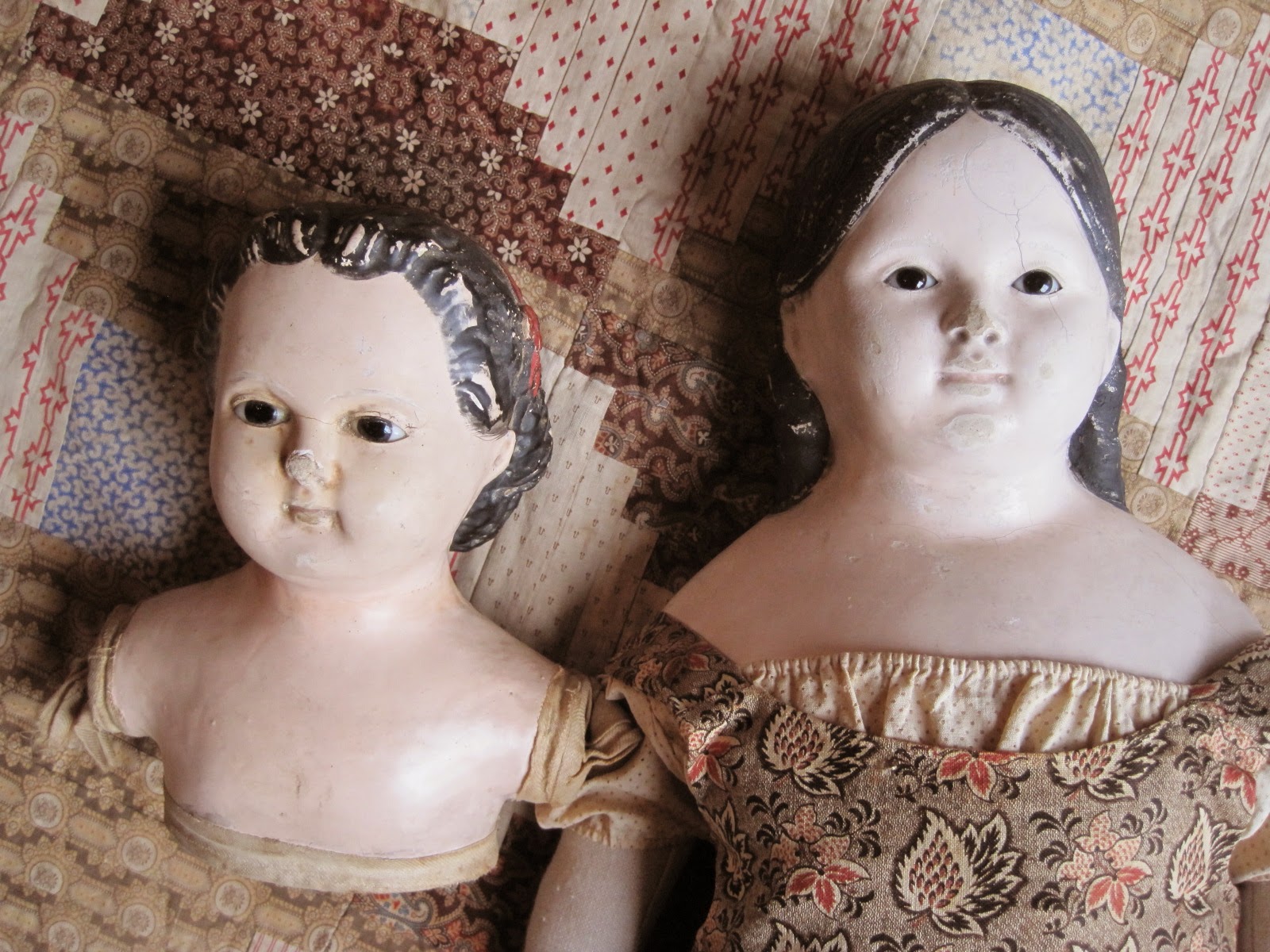 I believe this doll head with a snood was made about 1860. Most dolls I have seen of this type were waxed, but there is no residue of wax on this head even in the smallest crevasses.   She is seldom found in this large size.  As shown she stands 22 inches tall with child like proportions and would look correct on a slightly longer body.  Although she shows wear to her head this is preferable to restoration when wear is minor like this.  Her personality is intact .

To have a doll head with it's correct body is always to be desired. A make-do like this is mess so far as integrity and value are concerned.   I hope this doll can one day have the body she should have.  This does allow me to enjoy her till then.  edyth 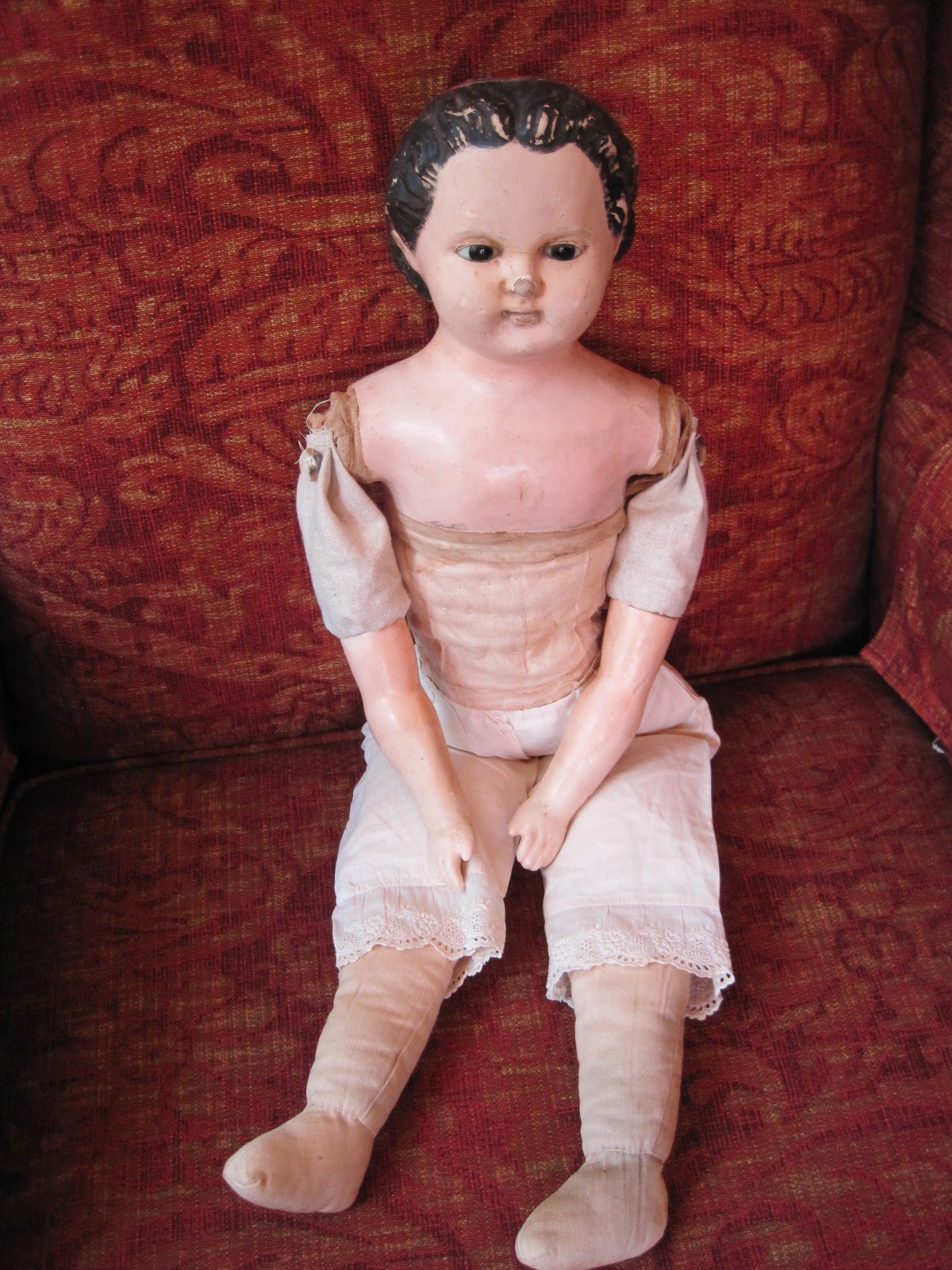 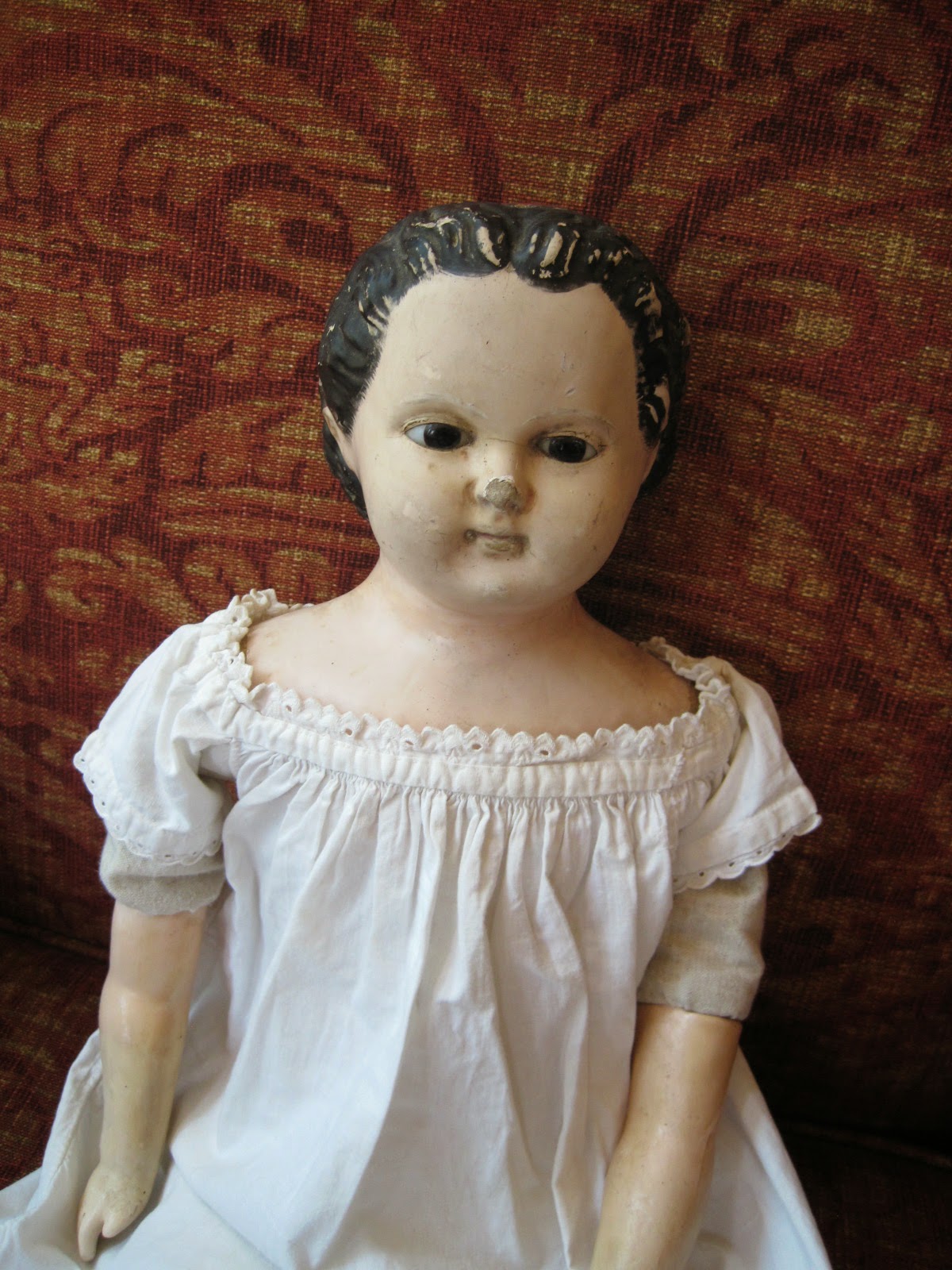 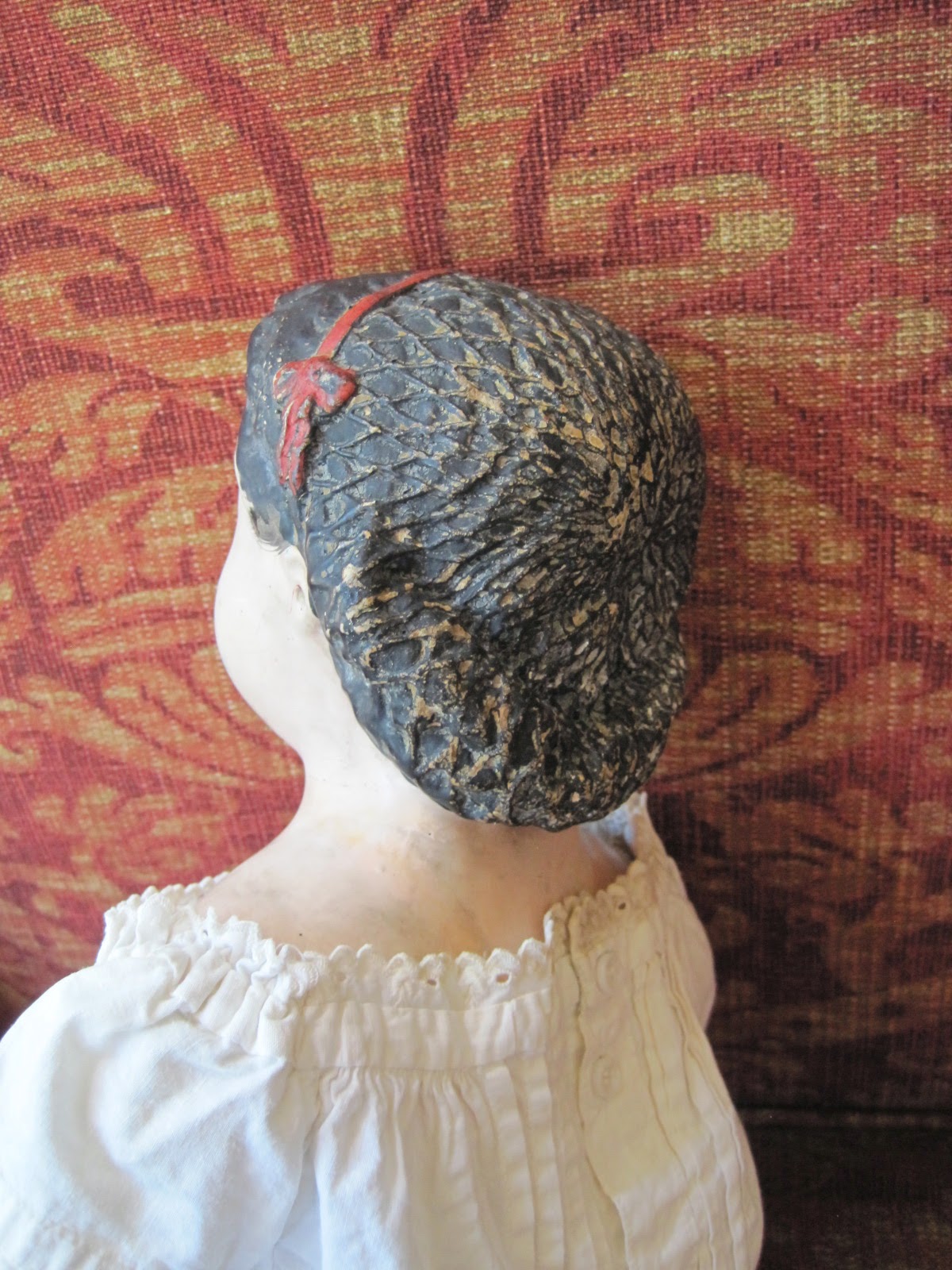 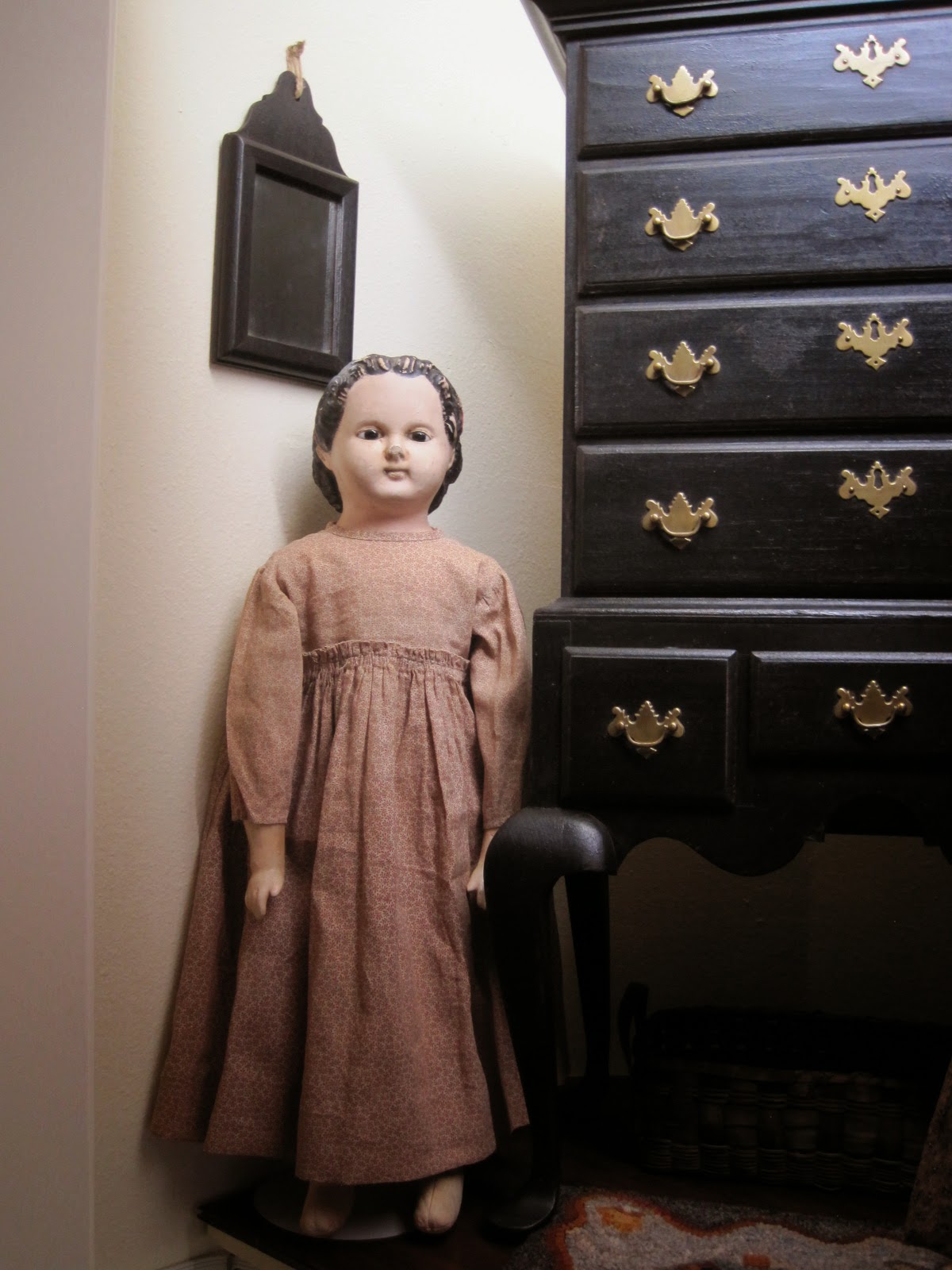