A Simple Support for Sitting Dolls

When I was taking pictures of the Babyland Rag pattern tester dolls, I needed a way to prop dolls up in a sitting position without seeing the support behind them.  I thought of using corner braces, which can be had for pennies.  And it worked very well! 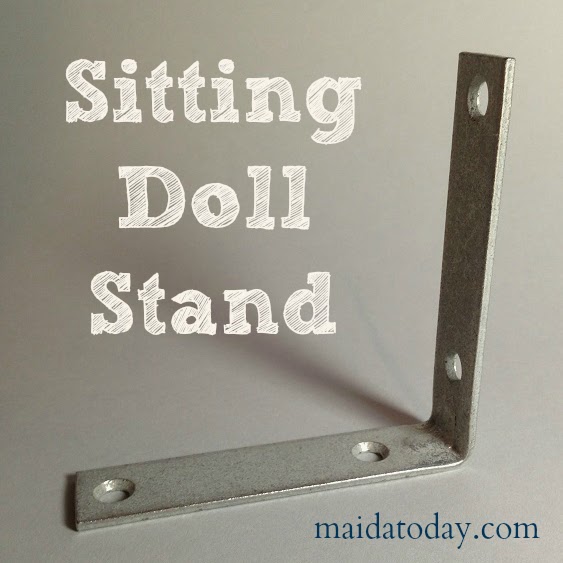 Next time I would wrap them in decorative tape of some kind to be sure the corners don't damage the dolls (they didn't).  This is what it looks like from the back:

You could put the angle iron underneath the dress and beneath the doll so the hardware is hidden.  It was a simple solution, so I thought I would share it! 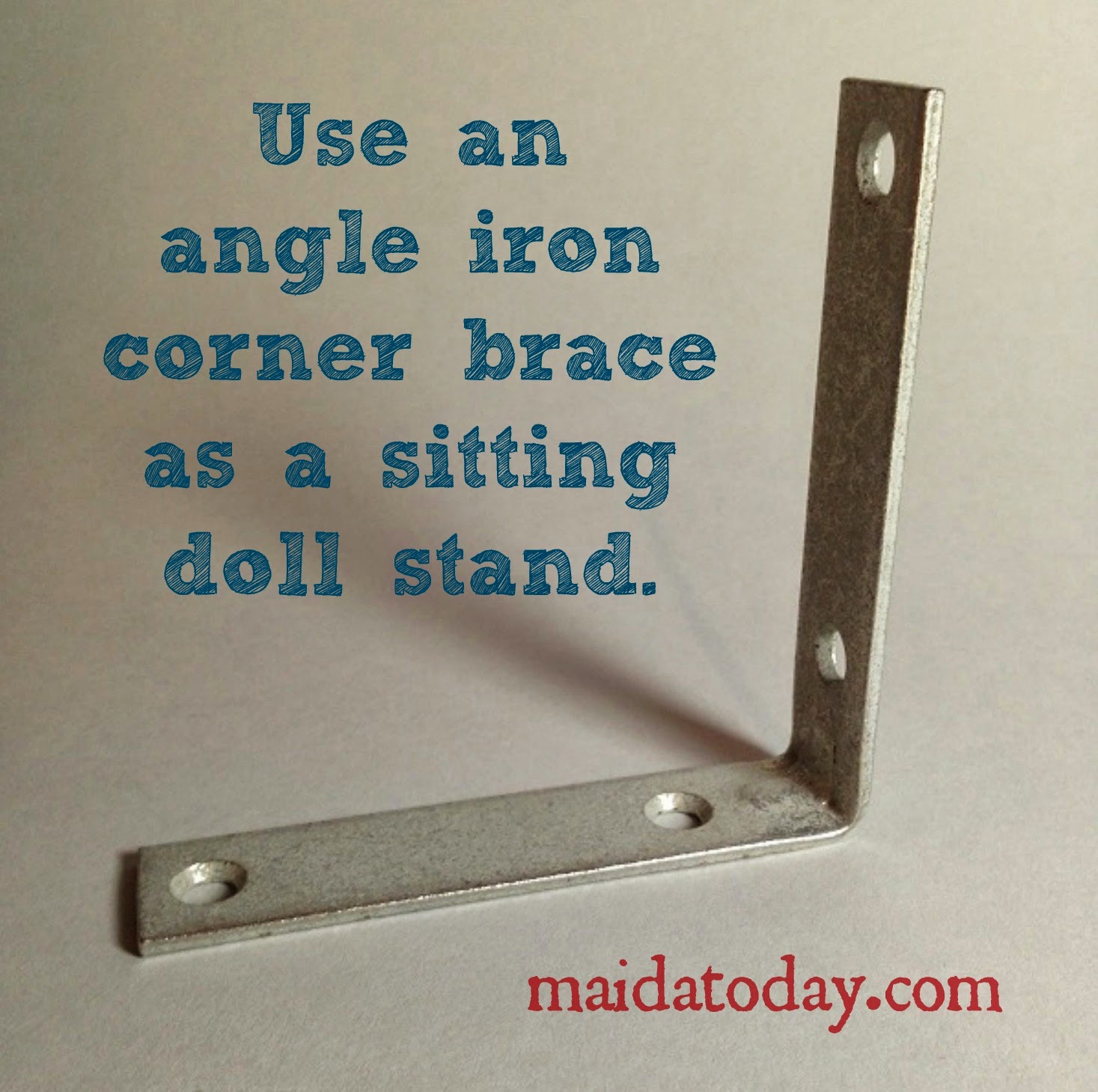 People often ask me if I will make additional dresses for dolls they purchase from me. Making dolls is my focus, not making doll clothing. I have my own undressed dolls which need help as well! Recently I saw a reproduction dress made by Carol McDaniel on Ebay.  I bought the dress and tried it on a doll made from my pattern, at left below. It was a perfect fit. 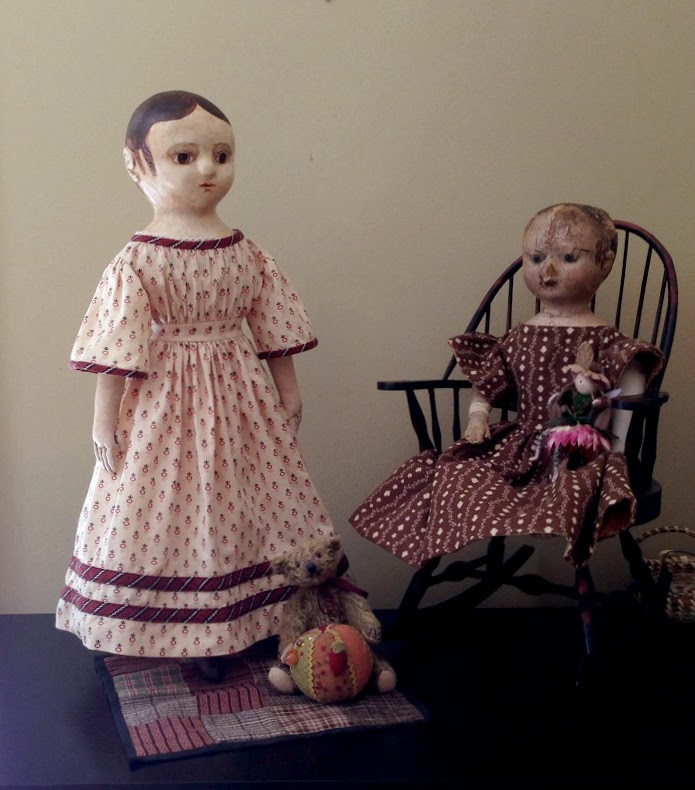 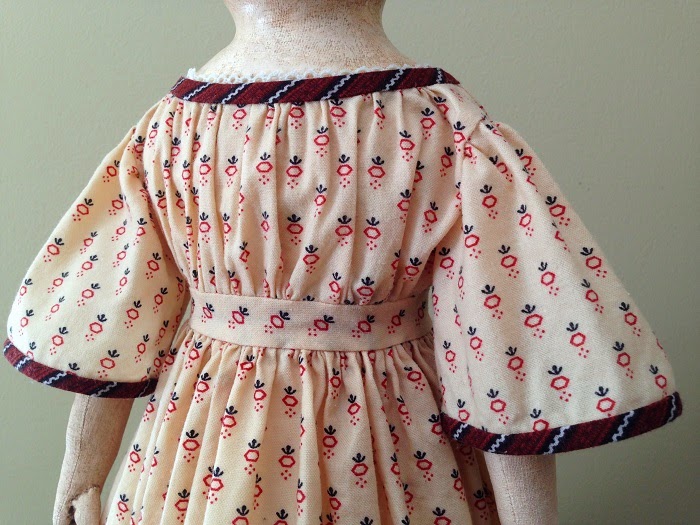 For fun, I tried the dress on my antique Izannah Walker doll, and except for the length of sleeves and skirt, it was workable. 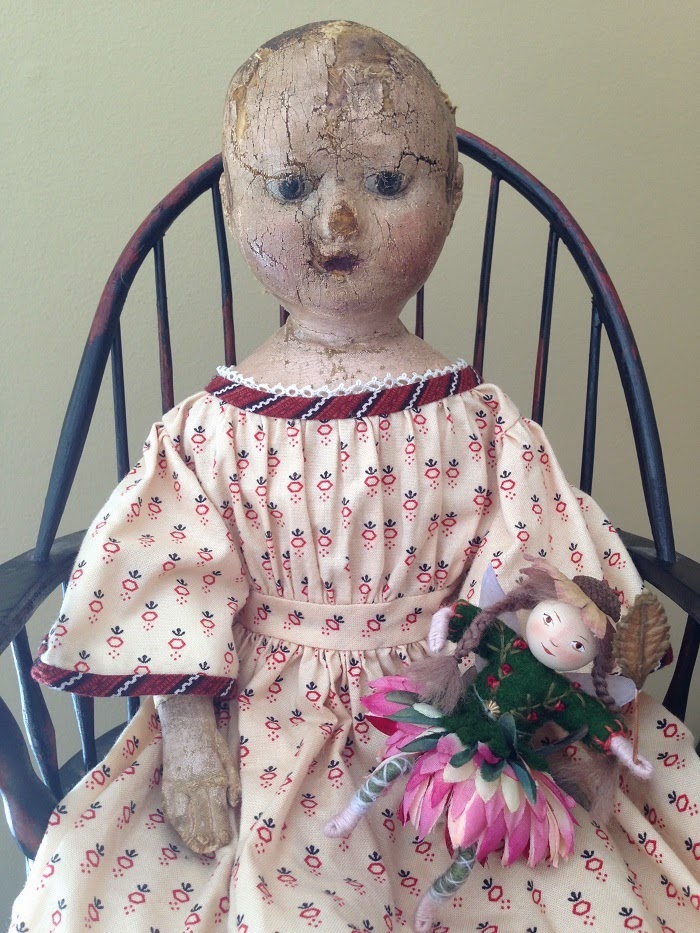 So I emailed Carol, asking if she could make a dress with a specific length of skirt and sleeve.  She replied that she does custom work. So....if you have dolls to dress, and like the style dress above, contact Carol about making a custom dress for your doll.  Carol also sells ready-made dresses for dolls on Ebay.

Last fall I asked for volunteers in the MAIDA dolls group to test a pattern I had drafted from an antique Babyland Rag doll who had lost her face a while back.  Several of the group joined into a Spring Project Group. The only constraints were to create something spring inspired and in the smaller sized doll in the pattern. (The pattern comes in a small size around 14" and a large size around 32".

The Babyland Rag Doll Body pattern is just what is says.  There are no instructions for clothing or for the second attached face.  Some people decided to create a doll inspired by antique Babyland Rag dolls, and others decided to use the rag doll pattern as a springboard for their own unique creation.

When their dolls were completed, they mailed them all to me.  You can imagine it was like Christmas at my house.  Actually, it was Christmas season. It was very fun to open the boxes and see all of the wonderful creations there!  You can see the complete album of these creations here.

I asked my photographer friend Danielle Dewald Pease to take a group photo of the dolls.  You can see Danielle's photo above.  I was there, unpacking dolls and getting them set up as best we could for a group shot. I have a new respect for photographers and magazine editors!

What outstanding creations these doll makers made!  Some doll makers were directly inspired by the Antique Babyland Rag Dolls.  Using their own ingenuity, they added second faces to the dolls, just as the original dolls had, and created clothing similar to the ruffle adorned originals.

Others created dolls using
the basic rag doll pattern as a springboard: 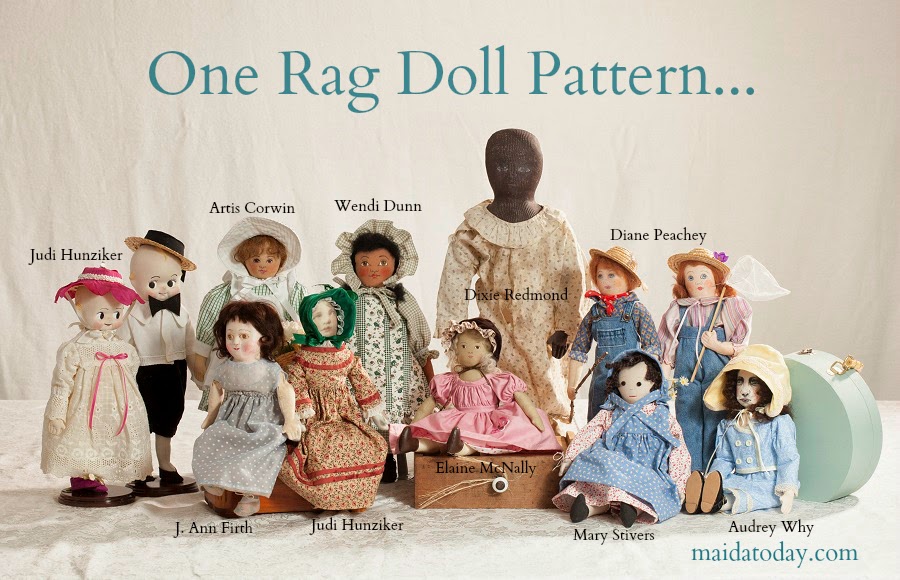 What a fun project this was!


The most recent doll making theme in the MAIDA Dolls Group has been Alabama Baby Indestructible Dolls.  Here are a few of the finished dolls as well as a slideshow of all the dolls done in the group at the end:

The MAIDA Dolls Group will be doing an Alabama Baby inspired doll challenge in early 2014, so I am saving images.

I asked Ebay seller 4206diane for permission to share pictures of the 20" Alabama Baby she has for sale on Ebay.   Diane graciously shared her images for us to keep for study.  She has this to say about the doll:

"SHE IS A ANTIQUE, (FADED)MARKED:  "PATENTED SEPT. 26,1905", ELLA SMITH, 20" ALABAMA BABY, INDESTRUCTIBLE CHILD CLOTH DOLL. SHE WAS MAKE IN ROANOKE, ALABAMA. SHE WAS DISPLAYED AT THE STRONG MUSEUM IN ROCHESTER N.Y. I BOUGHT HER AT A HIGH END AUCTION WHERE THEY WERE AUCTIONING OFF DOLLS FROM THE STRONG MUSEUM. SHE IS IN VERY GOOD TO EXCELLENT CONDITION. SHE HAS A NOSE AND A RIGHT CHEEK RUB. THERE IS SOME CRAZING TO HER FACE AND PAINT LOSS OVER THE 100 PLUS YEARS. SHE IS WEARING HER ORIGINAL DRESS AND BLOOMERS. SHE HAS PAINTED BLACK HAIR AND BROWN EYES.SHE HAS THE MOST WONDERFUL PAINTED ON BLUE BOOTS!" 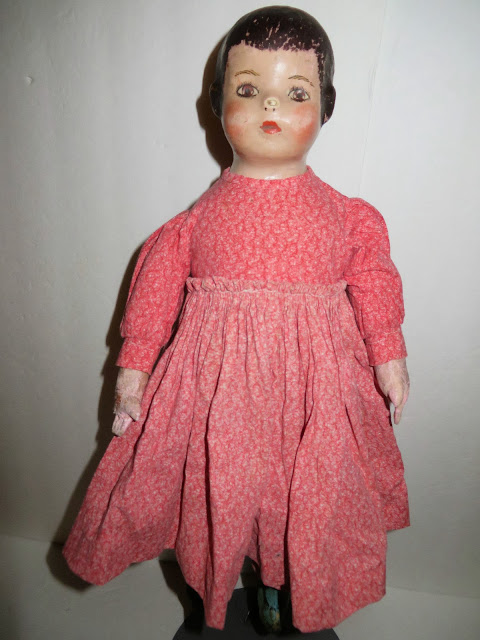 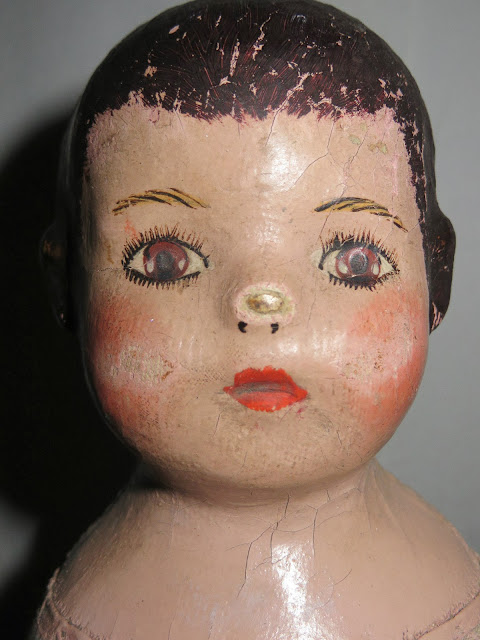 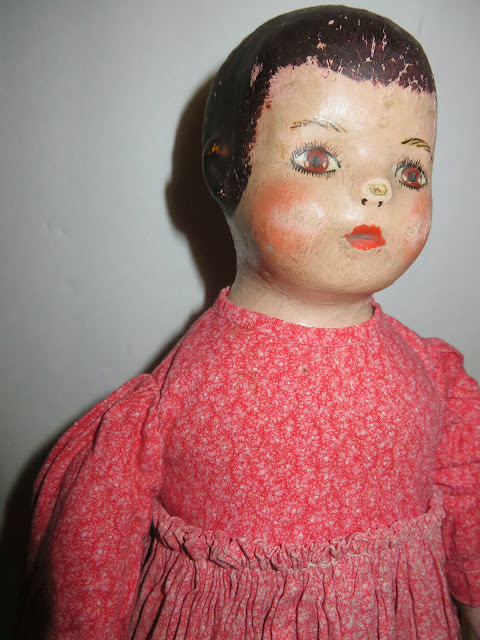 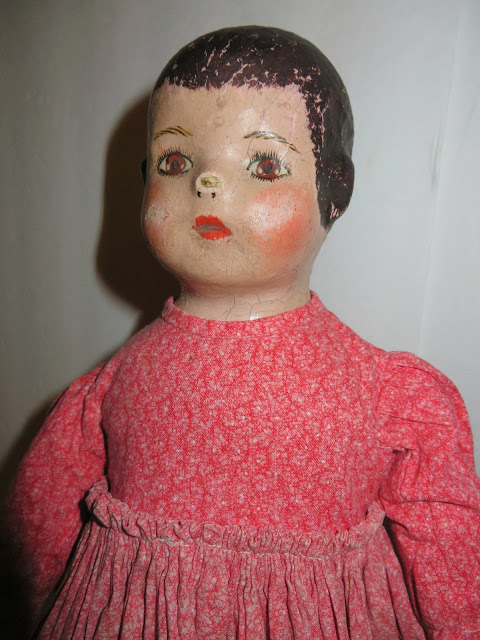 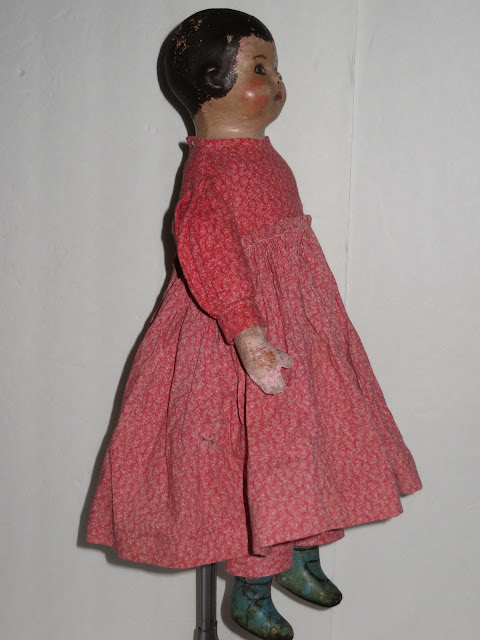 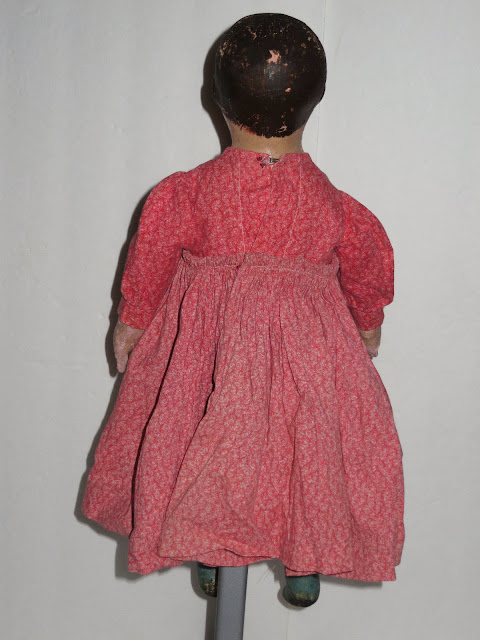 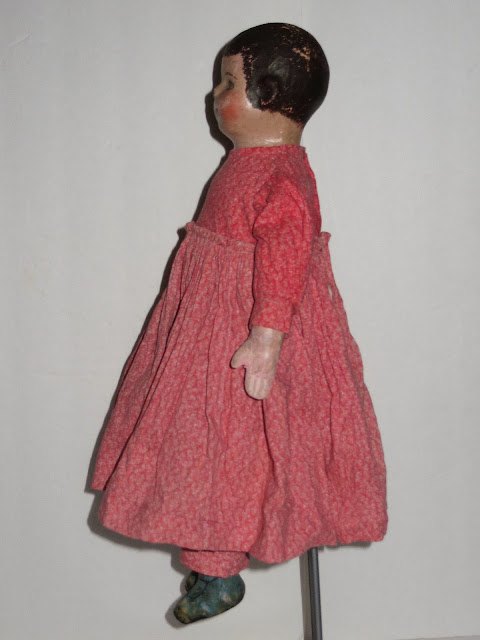 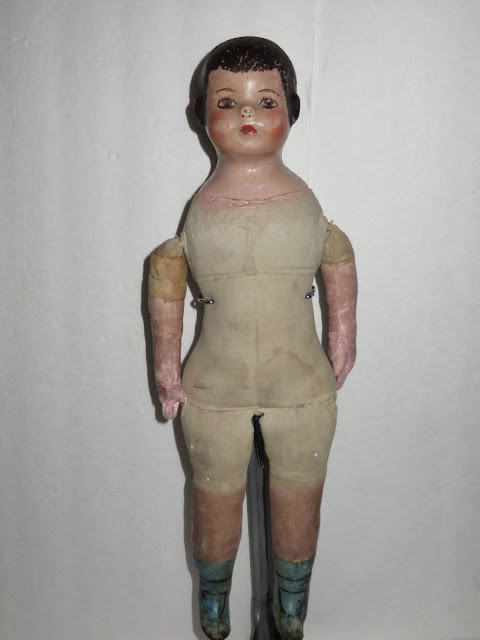 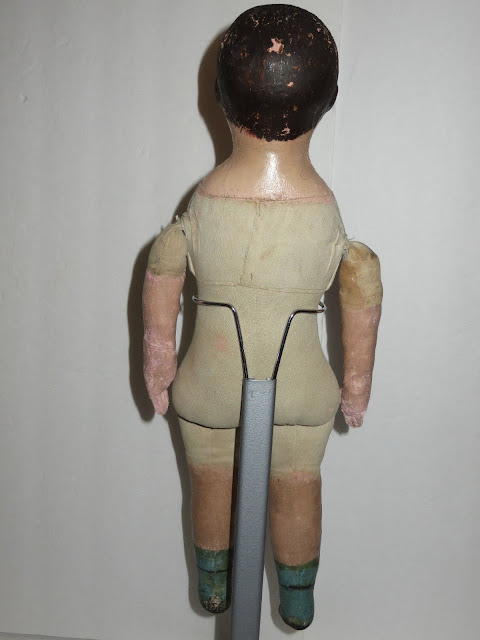 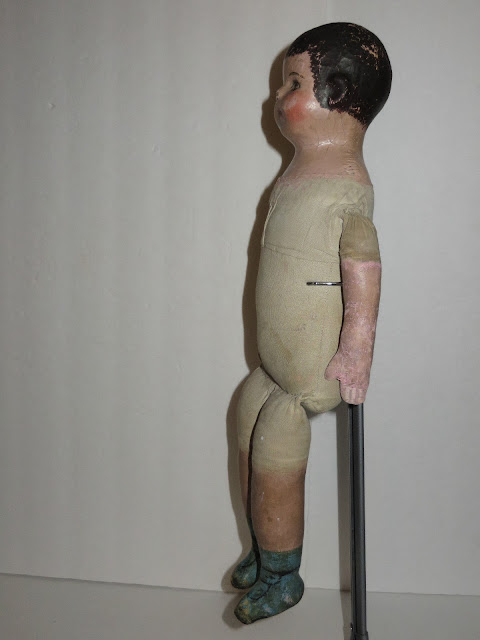 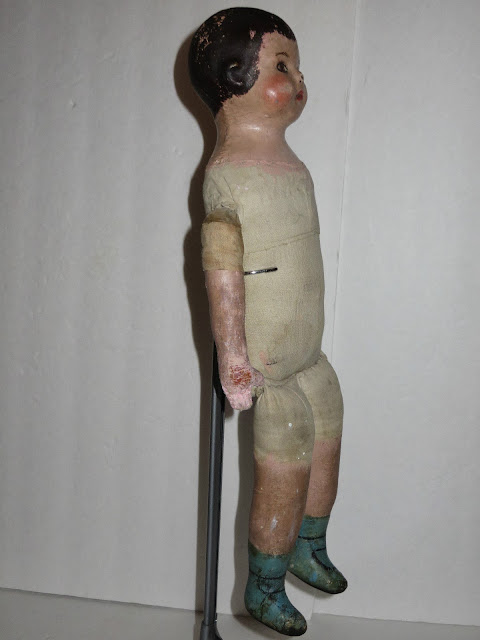