Antique Doll Apron Designs Are Icing on the Cake

Edyth's pattern for four doll aprons drafted from civil war era and late 19th century examples are sure to delight both doll collectors and doll makers.  Visit Edyth's doll blog to read about these antique aprons and to purchase her pattern.  These types of aprons are often found on antique Izannah Walker,  papier mache and China dolls. 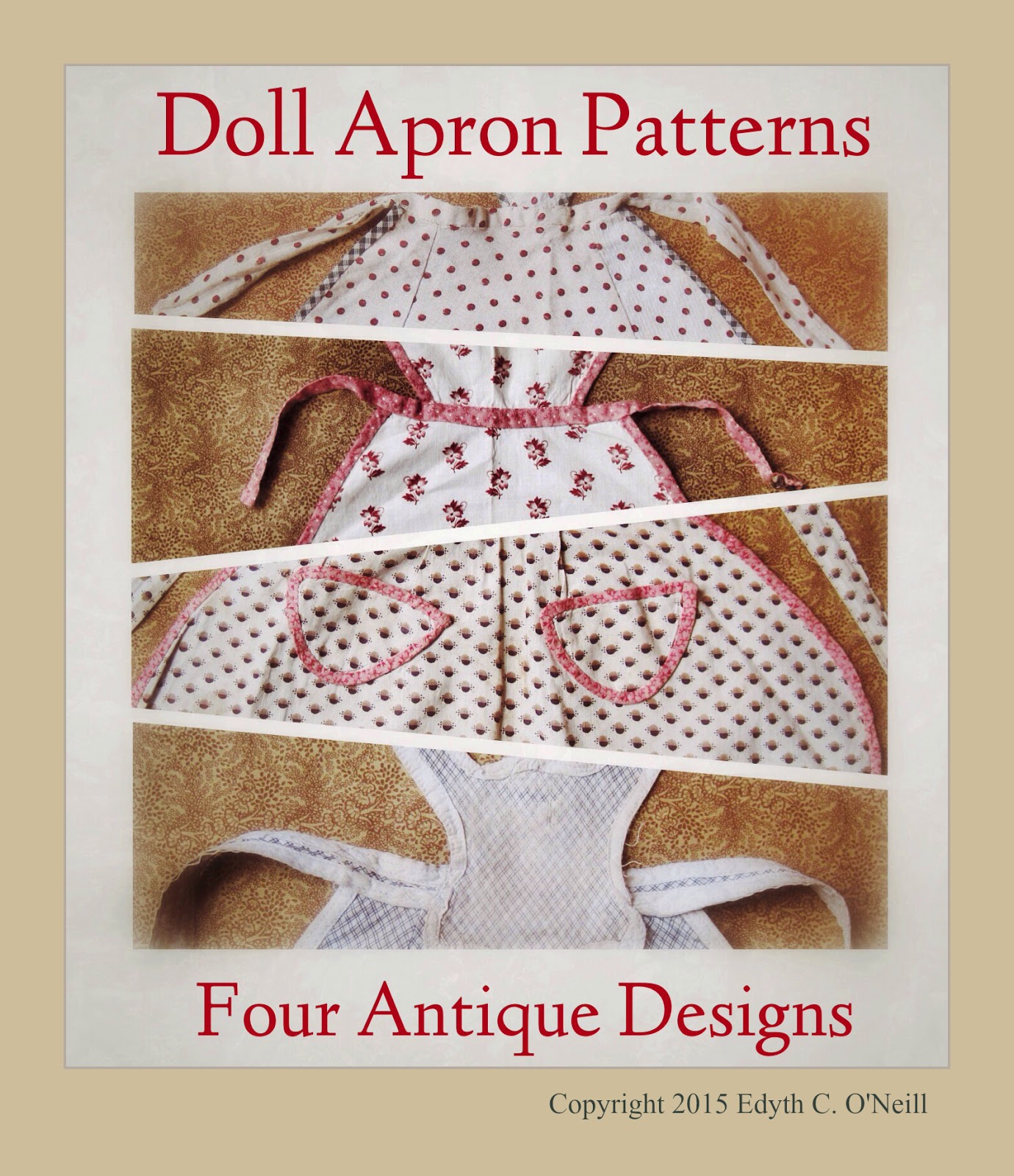 I, Dixie, used to save hundreds (thousands?) of inspiration pictures on my computer.  But since the advent of Pinterest, I have pinned what inspires me to a board called "Dolls".  For the most part, these are antique dolls, but occasionally a tutorial or modern folk art doll finds a home there.  If you love antique dolls or make dolls inspired by antiques, you might find this an inspiration tool as I do.  Here is a screenshot of this inspiration board.  Click the image to view the board. 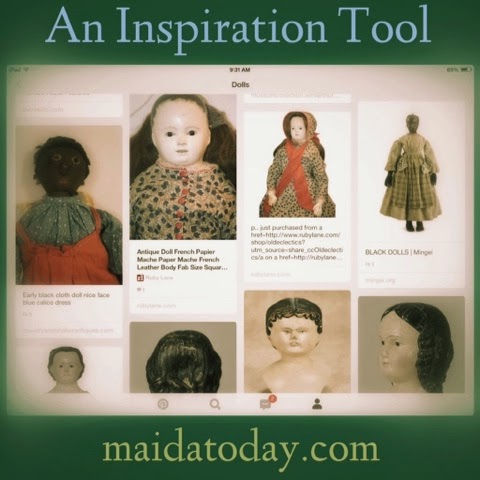 Pinterest is also a great research tool.  If you are learning about something, and you do not want the world to know, you can create a secret board, hidden from the public.

The dark side of Pinterest is that if people are only interested in images, once the images are pinned on Pinterest, they fly around freely without people visiting the source page.  That has definitely affected readership of this blog as well as the Izannah Walker Chronicles.  But, we adapt and overcome.  We learn to make the new tools work for us.

So...visit the inspiration board above.  You'll find lots of inspiration for making antique inspired dolls.
Posted by Dixie Redmond 0 comments 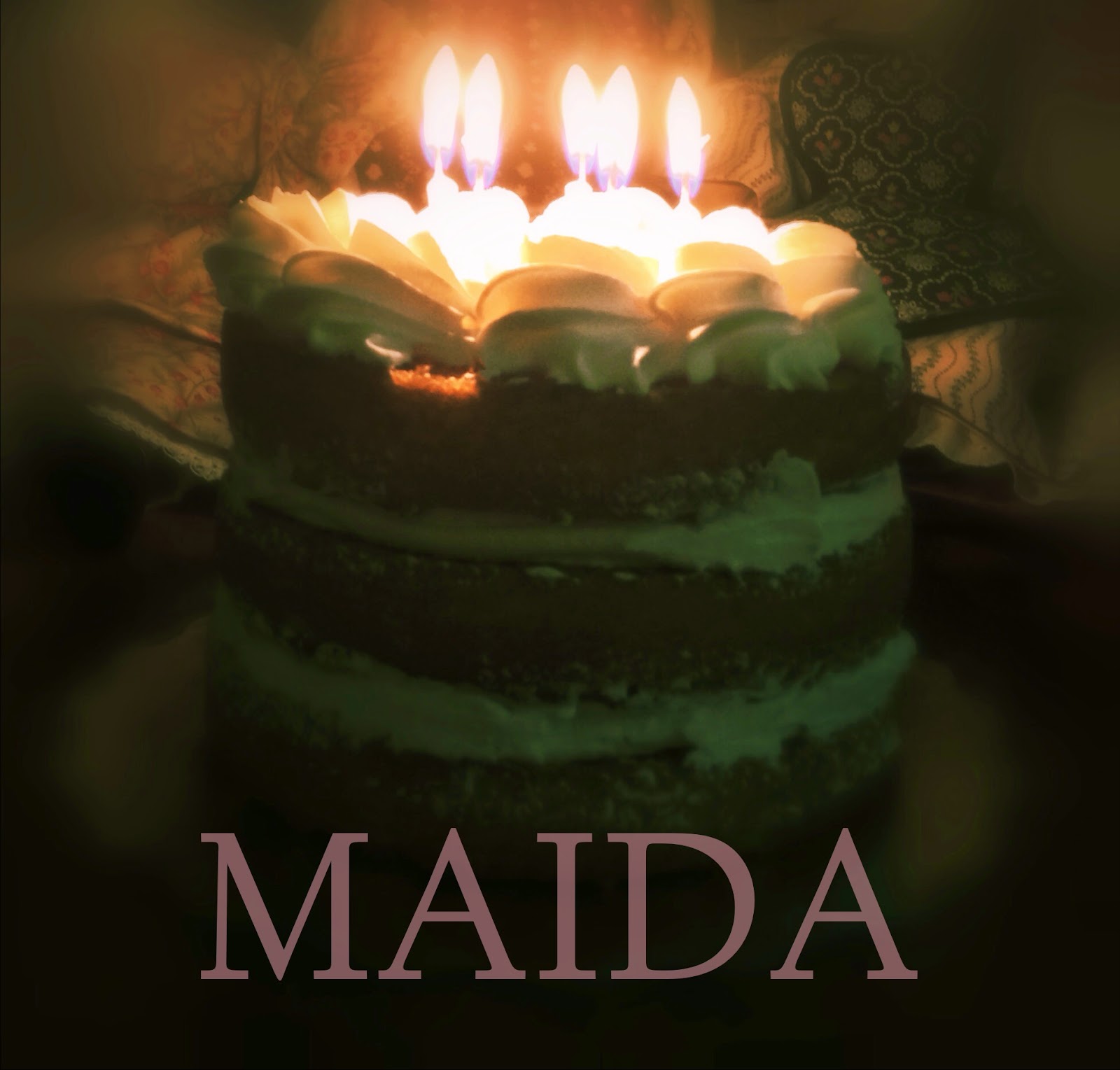 For over 5 years this site has been celebrating creativity and being inspired by antique dolls.  What better way is there to celebrate this milestone than to have a cyber party?  So, I got a cake....and candles...  Wait.  Where are the guests?

Oh, that's right.  Here they are! These are some special Iznnah Walker inspired dolls created by lovely doll makers.

To celebrate 5 years of inspiration, I decided to learn a new skill, to pour reproduction heads of a German covered wagon china doll in composition.  This required me to learn to pour slip in plaster molds, which was a big learning curve! Psssst!  As part of the fun I am making 5 of these available to MAIDA Dolls Group members to purchase. 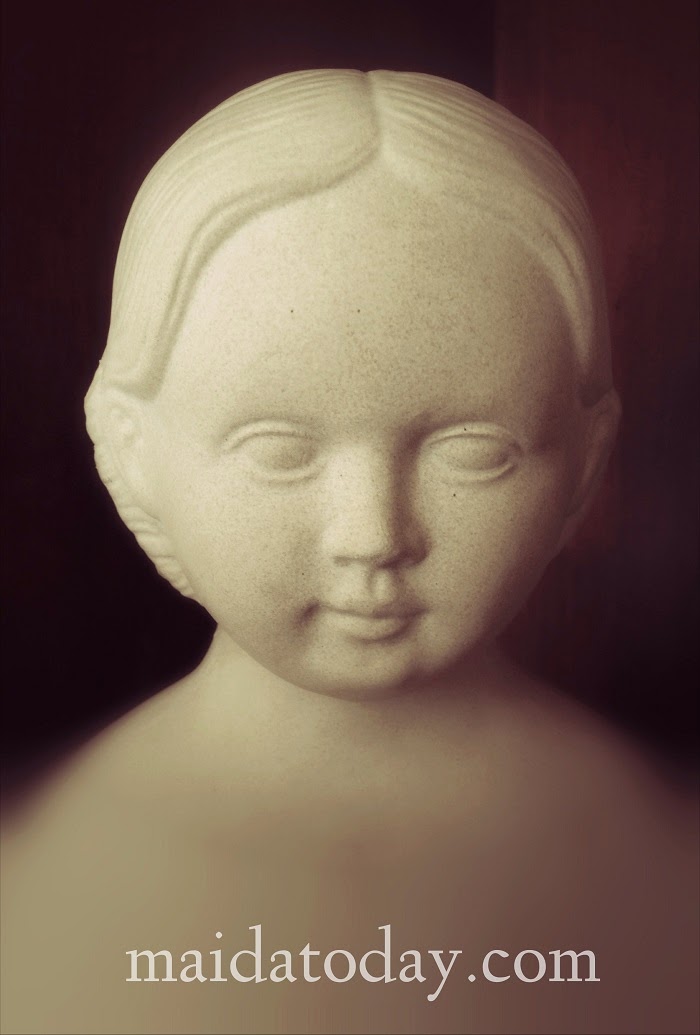 Edyth O'Neill joined in with me to mark this day by designing a body pattern for the reproduction head above. 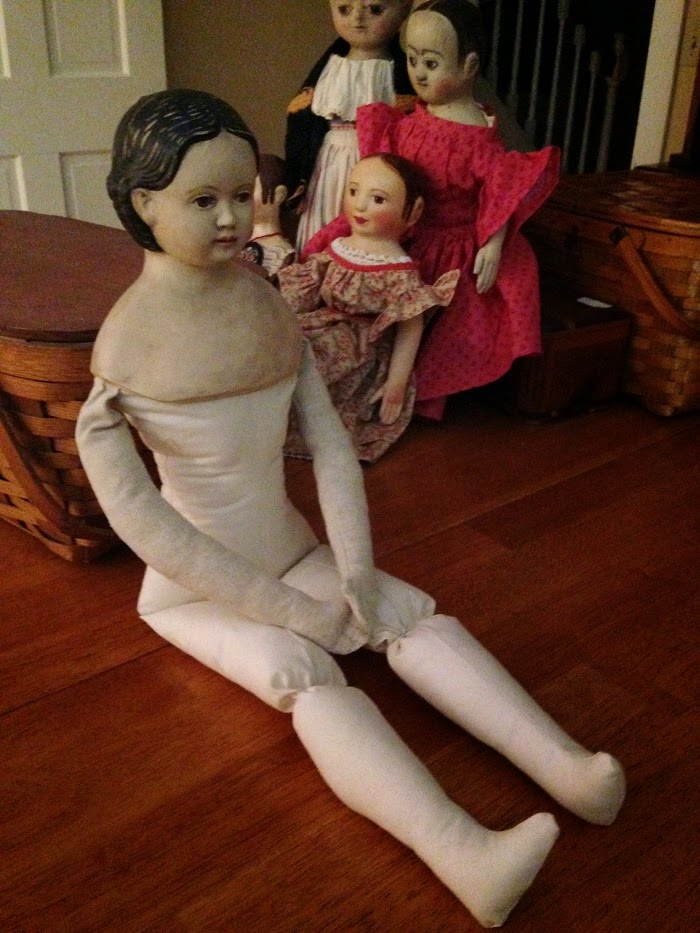 Below you can see one of the heads painted, and placed on a body made by Edyth with Edyth's antique style body pattern.  This body pattern fits the reproduction head, but is also appropriate for antique papier mache and china doll heads. 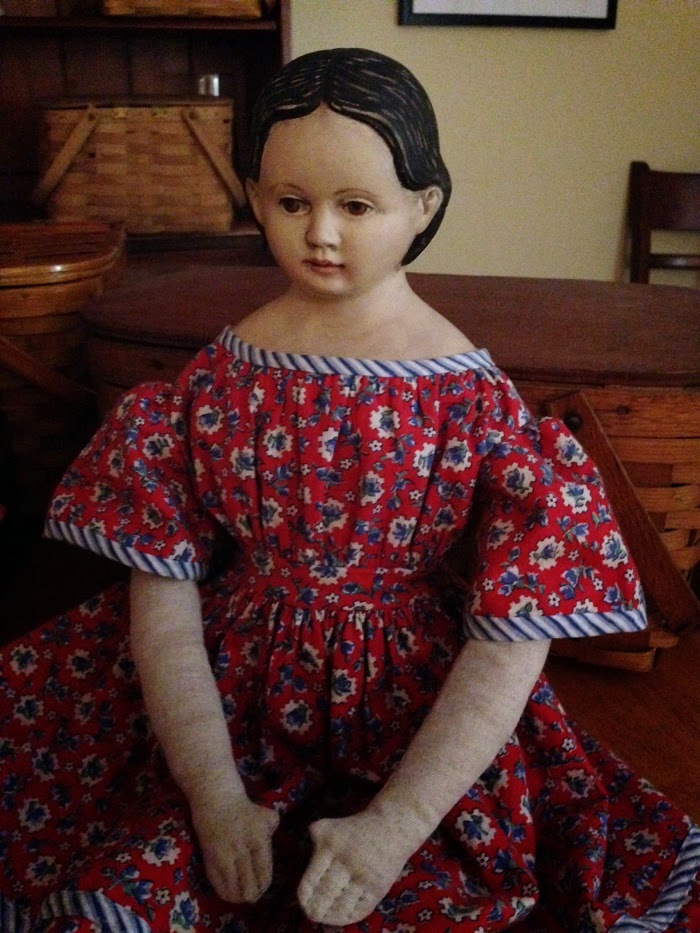 GIVEAWAY -  (THIS IS AN OLD POST and is over). I am giving away this wonderful sculpting tool made by Gail Wilson.To win this sculpting tool, leave a comment on this blog post.  I use this sculpting tool almost exclusively.  This tool was a game changer for me with my sculpting.  It fits perfectly in my hand, and is way better than the skewers I started out on, or the cheap wooden tools I found locally.  It is carved from apple wood. To read more about this tool, you can visit this page on Gail's site and scroll down to Molding Supplies, to Gail's Special Wood Tool. 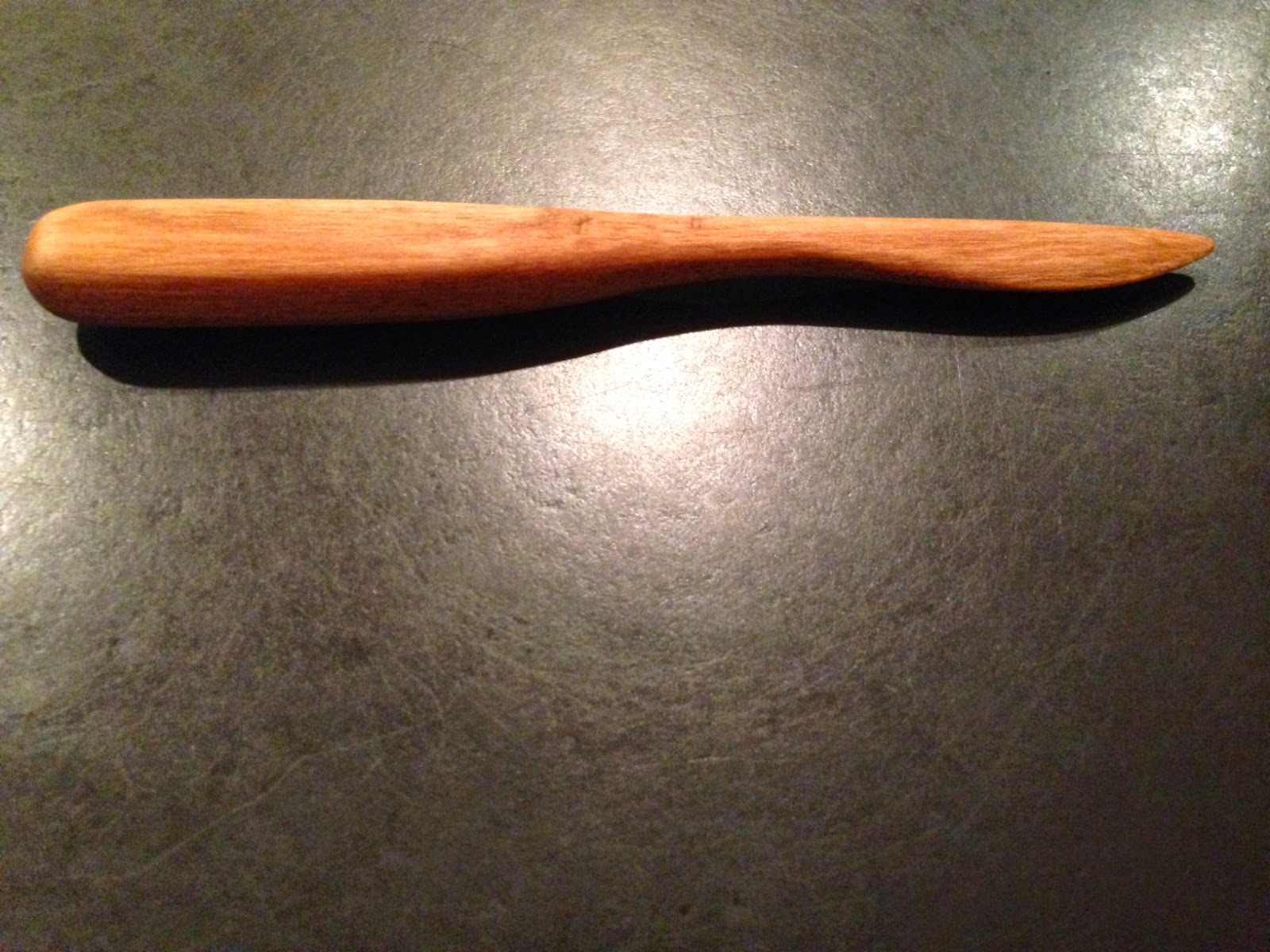 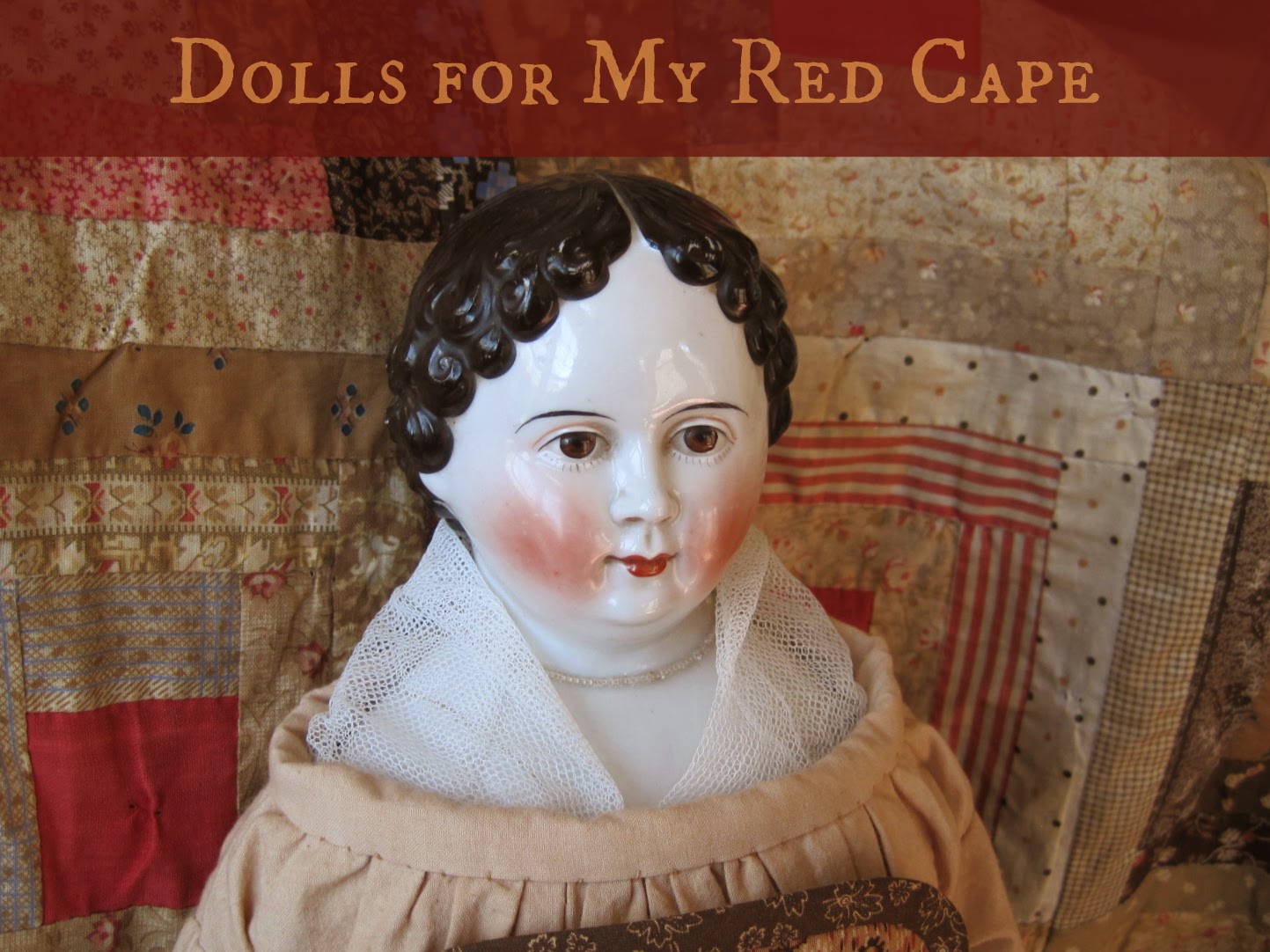 Thanks for coming!
Posted by Dixie Redmond 5 comments

Five years is something to celebrate!

The purpose of this blog is to honor the creations of the past and inspire present doll makers by those works.  I (Dixie, blog creator) have been thinking about ways to celebrate the five years.  I bought this image on Ebay as one way to celebrate.

A physical party is not possible, but a cyber party is!  So be sure to join on the 28th of February for our birthday bash.  There will be some fun things for "door prizes" and some surprises as well. 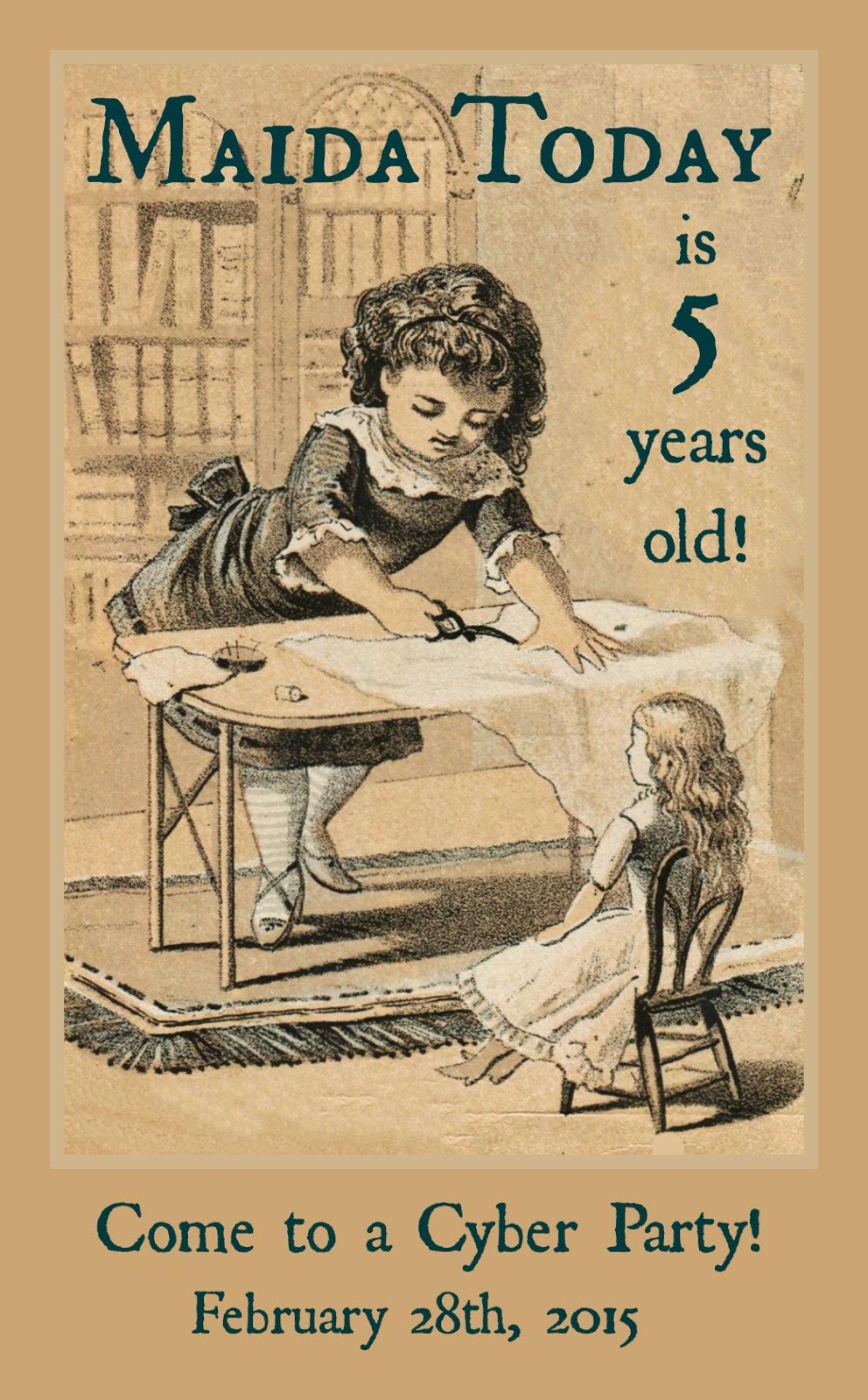 This blog began in 2010. That's five years! If you go through the archives, many wonderful antique dolls have been featured, as well as awesome artists.  I'm proud of this blog, and proud of the MAIDA Dolls Group as well.  At the end of the month, I have a fun project to unveil as part of the celebration.  Stay tuned! 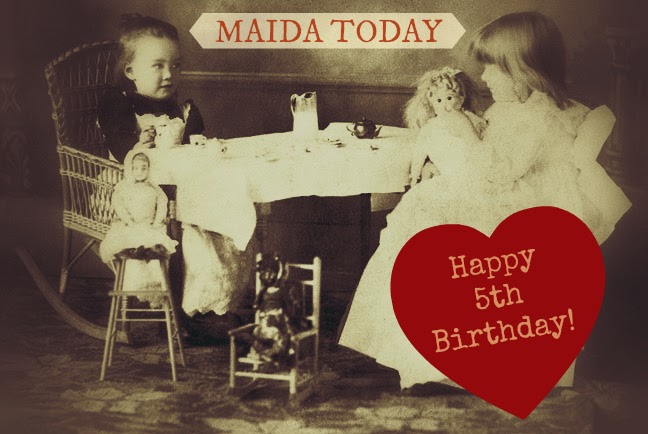 Doll Sized Basket Tutorial by Michele Made Me

Dixie here.  I would love to borrow Michele's brain for a day.   She is such an inventive person!  And what is lovely is that she uses recycled materials to make many of her crafts.   So hop on over to Michele's blog to see how she made these wonderful little baskets and what she made them from.  Michele is the modern incarnation of author of The Girl's Own Toymaker.  Enjoy! 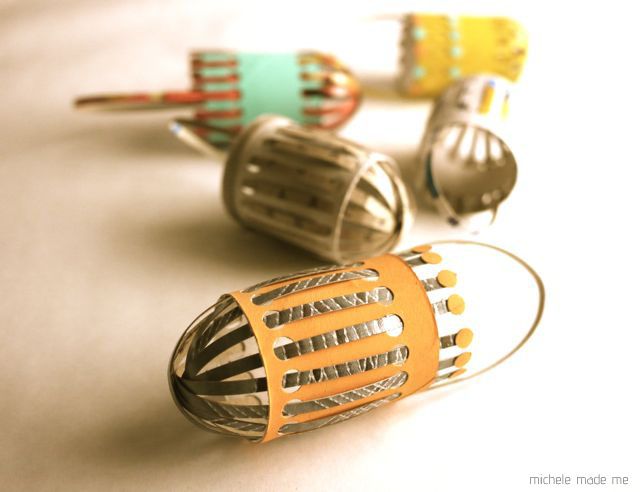 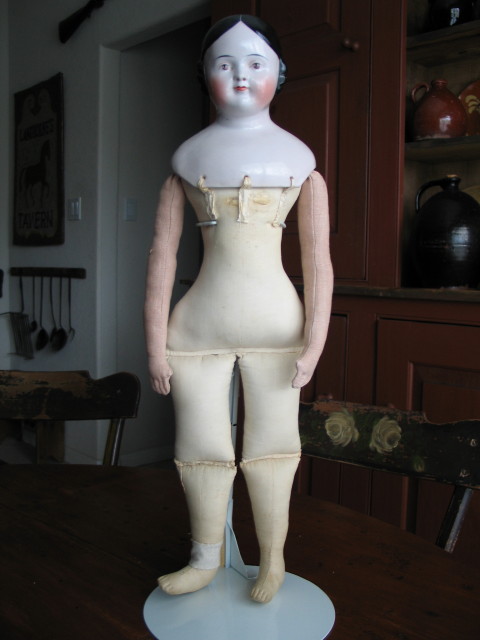 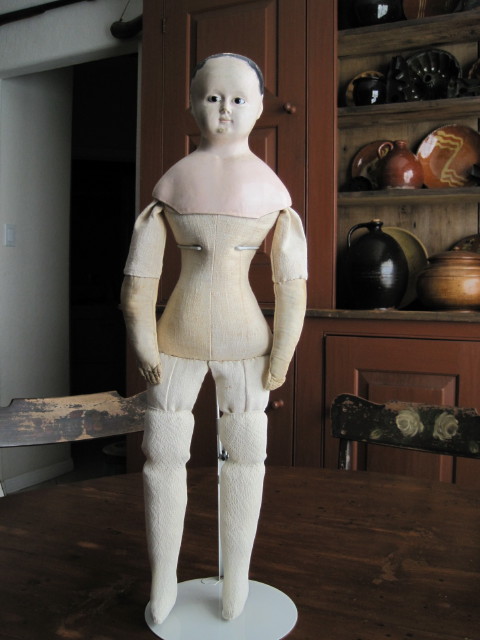 In MAIDA Dolls Group, we have interesting discussions. A question that came out of a discussion last year was this:
"How do I create unique creations from my perspective while being inspired by antique dolls?" 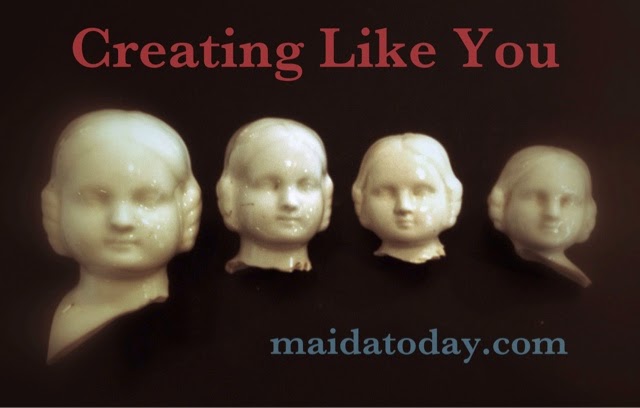 Some of us want to make dolls which have the timeless feeling of antique dolls but are not exact copies.  Like art students, it is important to learn from timeless works. But once we have explored a type, how do we fold that into making a unique new creation?  I posted the following prompt in the group for thinking about, and thought I would share it here:
The purpose of this series of prompts is to discover your own unique style through studying favorite antique dolls. For many of us, a way to do this is to try on the styles of doll makers who have come before. When we want to try and copy an antique doll, it is because there is something IN us that the doll speaks to.
So, choose 5-8 favorite antique type dolls and describe each of them.
Materials used: One of a Kind, Cottage Industry, Factory Made?
Processes used in making the doll? Examples: sewing, stuffing, embroidering, sculpting, molding...
Physical Description (large, small, soft, hard, fat, skinny...)
Feelings it evokes (calm, scary, mysterious, safe, excited...
Now, once you have evaluated each doll using the questions above, take note of what they have in common. Which words came up more than once? Make a list of those and tuck that list away.
Posted by Dixie Redmond 3 comments