In the next few weeks I want to repost some past interviews
with doll artists featured here on MAIDA Today.
Susie is one of my favorite people and artists! 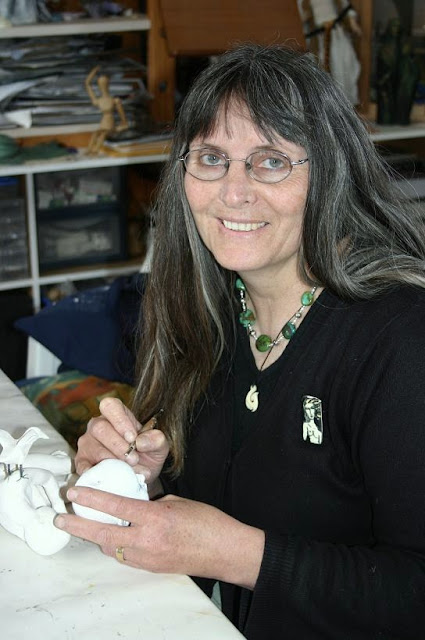 I've been making dolls for as long as I can remember - as I child I was always making things with whatever I could lay my hands on. Mostly I made little people - dolls - and I remember being always encouraged to have busy hands. I had that rare thing in the 1950's - a mother who actually encouraged creative mess! Even at Art School when I was studying Serious Art (note capitals) I made dolls and had "doll ideas". When I was newly graduated, a young mother and exhibiting paintings with a group I was showing dolls. Back then in 1973, they were just dolls: now I realize they were probably something more than that. Anyway, they sold well!
I've always been something of an experimenter - something that was driven by necessity. Tasmania, where I have spent my entire life, has a very small population so things used to be hard to source. I got used to doing pretty much everything for myself. Now with the Internet, it is much easier to share the interest, the knowledge and to source "stuff". The upshot is, that I have tried every conceivable material that could be used for making a doll. Lots of experimentation, lots of failure. lots of learning by doing.

How did you begin selling your work?  What was the first doll you made with the intention to sell like?   What prompted you to make that doll?

I had my first doll sales in 1964 when I was twelve - I had an order to make a number of large, floppy clown dolls after someone had seen the ones I'd made for my younger brothers and sister. The nineteen shillings and sixpence I got for each one made me feel rich indeed. And being paid for something I love to do. Life doesn't get much better than that at age twelve!


How does inspiration work for you...please describe your creative process... 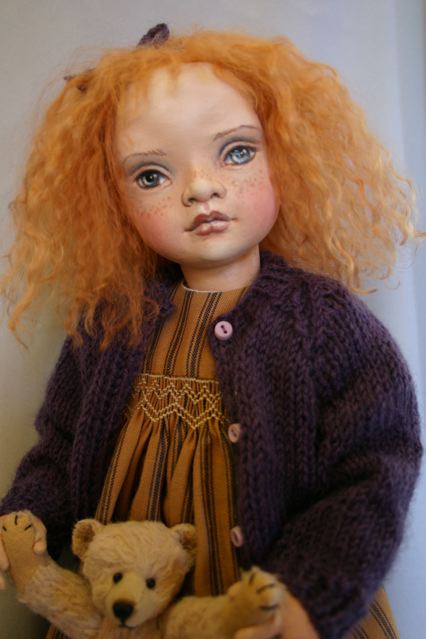 The creative process I go through when planning a new piece depends on what the piece is - if it is simply a doll in the style of a play doll, I just start making it. But if it is an art doll, it usually requires a bit more planning - at least a sketch and a number of working drawings to plan construction etc. I have quite a collection of sketchbooks dating from Art School to the present that make quite an interesting record of how my creative thought processes have changed and developed. These days, having worked at my craft for so long, I can usually have a piece end up looking pretty much how I conceived it - this wasn't always the case - I used to get very frustrated by the inability to realize a concept how I saw it in my mind. Usually what blocked it was lack of skill in some area. A lifetime of working at it means that I now have the necessary skills to make what I see in my head.


What is your favorite doll that you've made? 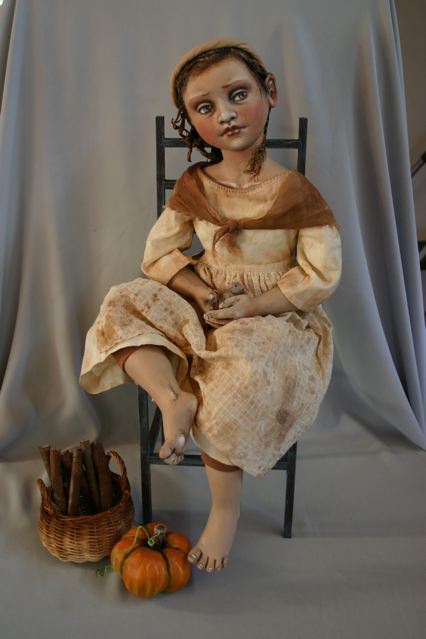 It's hard to pick a favourite doll that I've made - for me the actual making process is what is important. Once the doll is made and I am happy with it, I've moved on to something else and I usually have no particular attachment to it. Having said that, I liked this piece that I made last winter. It was on a much larger scale than I usually work, so I was able to really get some expressive nuances into the face, which pleased me. 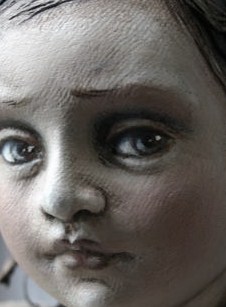 How has your work changed since you began doll making?  How do you see it changing in the future? Of course my work has changed and evolved. I mean it's been a long journey! If I felt I wasn't evolving as a doll maker, I think I would rapidly lose interest. Doll making is fascinating because there is always some new path to go down; some unopened door with hidden treasures behind it. 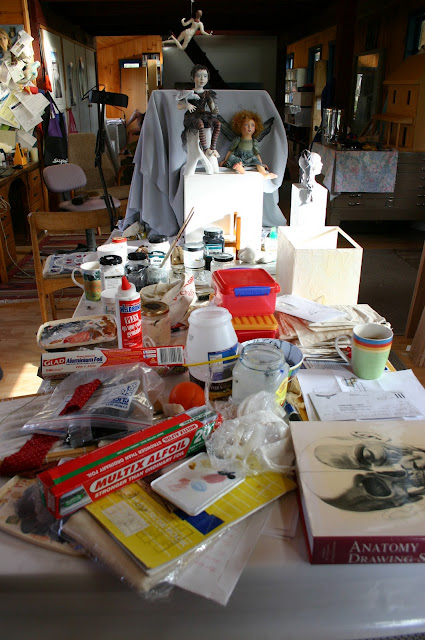 Some years ago, my husband built me a studio.........well it's for both of us really. He's a writer and photographer so he uses one end and I have the other. It's large, so we don't get in each other's way, except that I like to work to music and he doesn't and I like to have the fire cranked up in winter (the woodstove is in my end). The space is large enough to have classes of up to about ten people. It's light and airy and a pleasure to be in. I also like the fact that it is separate from the house, so I have to leave the house and 'go to work' each morning. So much better that the dining table, which was my previous work space. 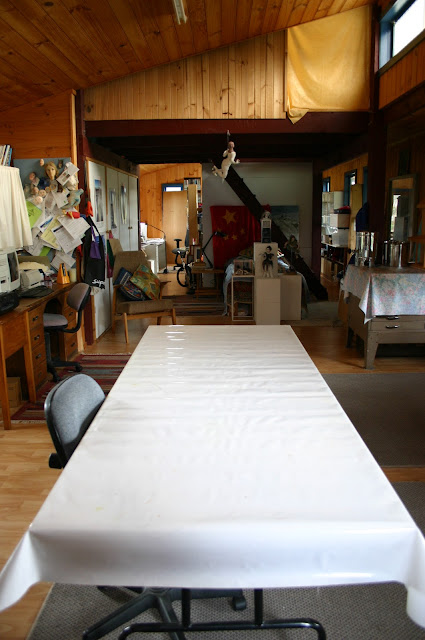 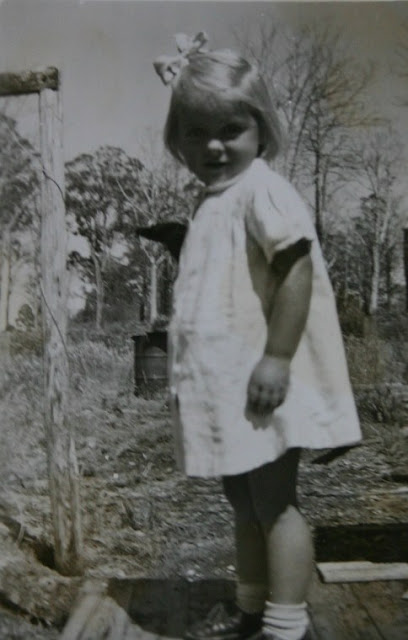 I must have been a 'doll person' as a child - every picture that exists of me (there are not many - I was meant to be a boy after the birth of my older sister) has me with a doll of some kind tucked under my arm. I was always making them and their habitats (see no 1 above). As I child I was given a special doll by a friend of the family - it had been in his family for many years. It had a papier mache head and limbs and a cloth body. I called the doll "Lonny doll" and I lost her in the bush over the back fence where we used to play. I must have been about five and I felt that loss intensely. Sometimes I wonder whether all this doll making I do is somehow an attempt to assuage the dreadful feeling of loss when Lonny doll could not be found.

As a child (pre TV in Tasmania) I used to play lots of imaginitve games with my siblings and with friends. And I was always drawing or making something. I loved school and did well academically. 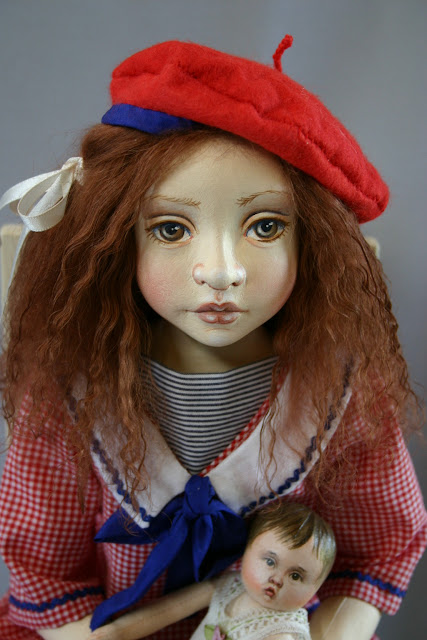 I have a couple of vintage dolls - no antiques. They were given to me. I have bought some dolls made by artists. I have one by Susan Fosnot, one by Maggie Iacono and an Annette Himstead doll.


What are some of your hobbies?


My work is my life's passion, but apart from creating dolls, patterns and related stuff, I play music, I like to garden and I read a lot. I also paint, sew, knit, embroider etc, etc. And I love to cook.

What keeps you engaged in the creative process? 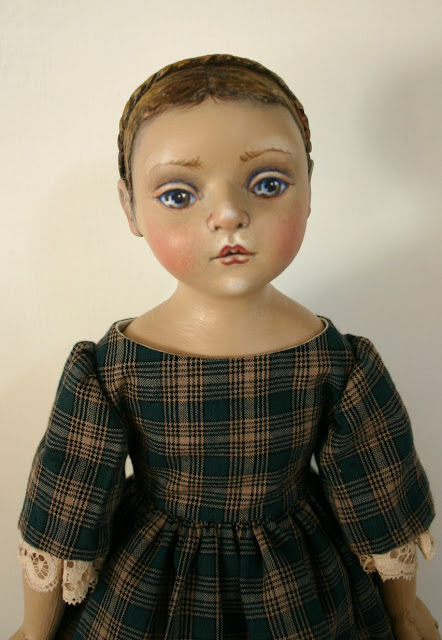 I think I stay engaged in the doll creating process because there is always some new challenge. One aspect of doll-making that I find particularly engaging is the fact that you get to dabble in a whole lot of different things in the process of making a single doll - it's never boring!


There is a whole lot of stuff swimming around in my brain - like a big soup. It results from everything I've experienced - seen, heard, read etc. This Inspiration Soup just sloshes around and occasionally an idea pops out and demands to be made.


Who are your favorite doll makers?

Inspirational dollmakers............Kaethe Kruse, Izannah Walker, Marion Kaulitz - all in dollmakers heaven. Living dollmakers who inspire? Lisa Lichtenfels, Jo-Ellen Trilling, Scott Radke. There are others, but these come immediately to mind.


What are your favorite types of antique dolls?


Among antique dolls I am most drawn to anything made in cloth. I haven't seen too many of them in real life, but even in pictures they are instantly appealing.............much more appealing to me than a French bebe in bisque with big glass eyes and all the frills and furbelows, for example.


Don't know where this comes from, but it is a great quote: "Hardening of the categories leads to art disease."

Each interviewed artist is asked to come up with a question and then answer it.  This is Susie's question:

Given ideal circumstances, how many hours a day would you like to be able to devote to your doll-making?

My answer: Probably at least ten. I dislike how everyday things tend to eat into my creativity time. I need a maid!


Visit Susie's blog to see more of her work.
Posted by Dixie Redmond