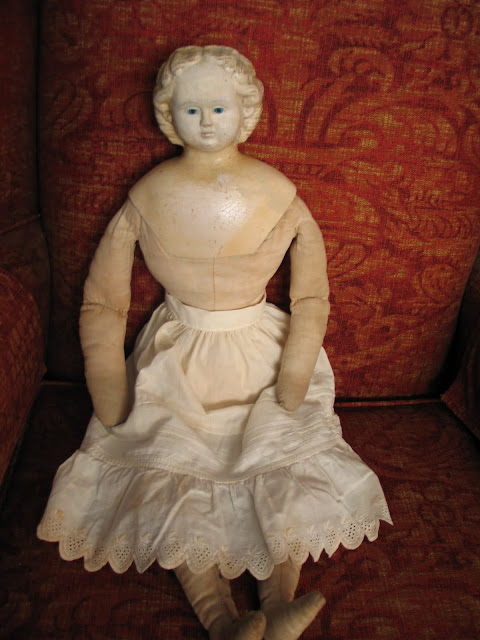 Doll heads without bodies were made and sold by the millions and millions from the mid 19th Century until well into the 20th. Some of these were later mounted on commercially made bodies sold separately, or on bodies which had suffered the loss of a head through breakage. But the most charming outcome was often a body made by loving hands at home, and looked it. A twill weave cotton was a popular choice of fabrics. 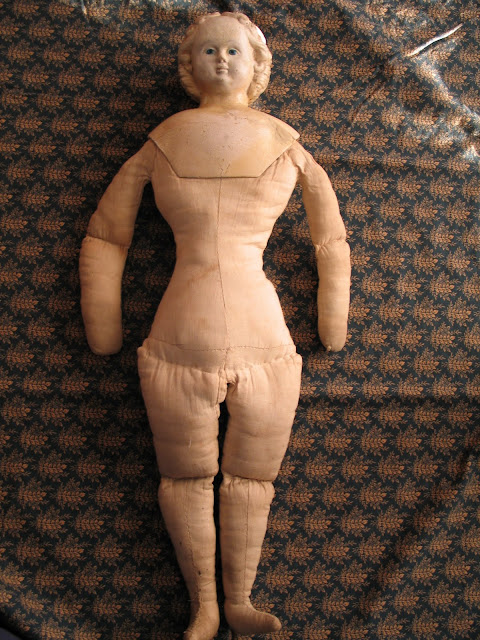 One example with a home made body is this doll with a blond Greiner head having an 1858 label, no extension. She is such a pleasant chunky little person, and delights me. She came to me as a doll with a good bit of facial damage, but has responded well to my efforts to remedy that. I have a nice dress started for her of a civil war reproduction print in brown. Her arms end just rounded off to serve her as hands. The torso is made in 4 parts, and included the thighs in front on that same piece. The handsewn body has a nice fanny shaped with pleating at the sides. The bottom parts of the legs are the usual 2 part pattern including feet. In short the body is an often seen very well made pattern for a doll, but one has to wonder why the hands were left so primitive? 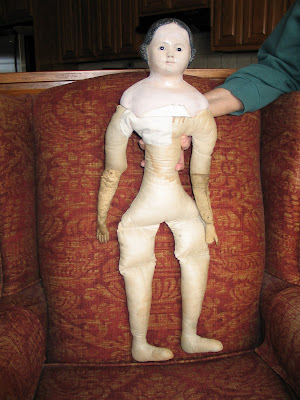 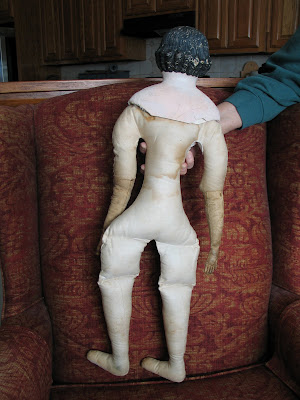 A glass eyed doll head made by Andreas Voit in approximately 1850 has a hairdo collectors call “covered Wagon” style. The maker of her entirely handsewn body went at it in a no nonsense lets get this done way. The body is made with the upper thighs, the torso and the ARMS made all in one pattern shape, a front and a back cut alike. I feel that the leather arms and hands must have been added by someone along the time line of the doll, as they are well shaped and sewn and do not fit the old arms well at the joining. This type of arm did not provide much mobility, and a terrible tear in the front chest resulted in the cotton stuffing pouring out. I put a large patch in this place. So a one piece front and a one piece back plus lower legs were likely all that was done for this early pretty doll, 27 inches tall. She came to me with the head in many pieces, crushed beneath something in an attic long ago. I have rebuilt the head, far from perfectly, but she smiles at me now and I smile back, who has more than that? The illusion of life in her bright little black eyes could not be extinguished.

And then there is the body of the 10 inch papier mache doll head pictured fully dressed. The stained and limp old body she came with was leaking sawdust all over so could not very well be left as it was. The question was to patch it, or recover it, or replace it with something clean and sturdy. 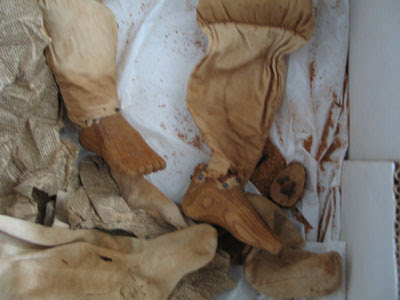 The large paper mache head was on this body with ragged clothing and very tightly fitting old shoes. I began by taking off the sox, very holey, but charming. Inside the sox, the otherwise rag body has carved wooden feet! The feet are held on with tiny tacks, which DH said may be as old as mid 19th century. They are beautifully done, with distinct toes, not the least primitive. Were they made for this doll body? My husband thinks maybe so. Were they part of another doll or artist figure or creche figure? I would guess that. They have never been painted. It is amazing how closely the old shoes fit. 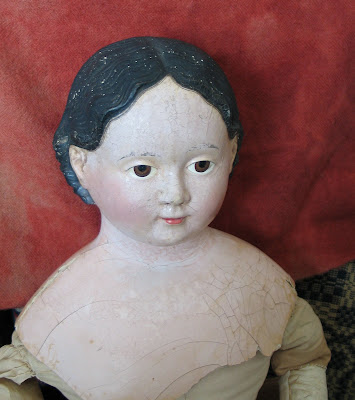 I carefully eased the head off the body, using the handle of a spoon to push against the fabric under the shoulder, and NOT against the fragile papier mache. The head has a patch inside the back curls. The top of the body was a surprise! There, made in the same piece with no seam at the neck, was a head shape! There was no face or indication it was ever used as a head, just wadded up and stuffed in the neck. 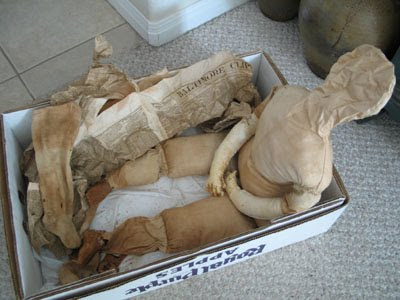 Why did the doll maker put a cloth head on the doll body? The entire old head and body is hand stitched, with back stitching for strength. The torso is cotton twill, the legs and upper arms smooth old cotton. The worn out leather hands, much patched, are lately attached with white thread unlike any other on the body, obviously not original or even with her a long time. 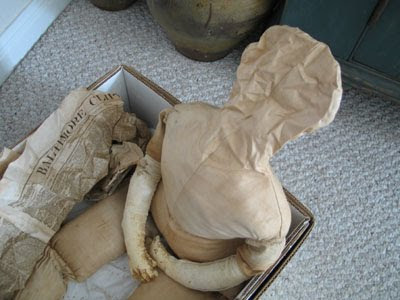 Now to the stuffing! Some parts were stuffed with sawdust. I opened a seam here and there and removed that, stuffed cotton gently and not too tightly in place, and sewed the seams back together. Some parts were stuffed with cotton, I did not bother those. The top of the body had a great deal of wadded up newspaper, the Baltimore Clipper of 1860. Reading all those notices in that is fascinating! One notice is about the Mount Vernon ladies society purchasing Mt Vernon from a Washington descendant. Along with the sawdust of a lower leg was a wad I think says 1861. I debated what to do with the doll's interesting extra personality! I pictured it in an email to friend Helen, who said I should call the old cloth doll “Inner Self”. I made a fresh body for the papier mache head and dressed it in a nice old dress I bought for her. I can keep the old body, feet showing and head lightly stuffed and set it around naked with the rest of the dolls. It seems too interesting to cover up. The newspaper is in a plastic sheet cover to protect it and help flatten it. There is a name inside the papier mache head in pencil, not really old writing, “Ruth Hancock” I believe. Maybe this is the person who mended the curls in back. Or it could be the name of the original owner. This great 36 inch doll often sits beside her alter ego, Inner Self. 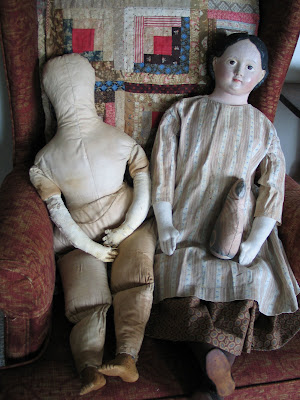 The study of old cloth doll bodies is a never ending story of surprises. If possible to patch or restore them lightly they should stay with or on the doll to add interest. I invite you to add links to pictures of some you have found in the comments section. ~ Edyth O'Neill
Posted by Dixie Redmond